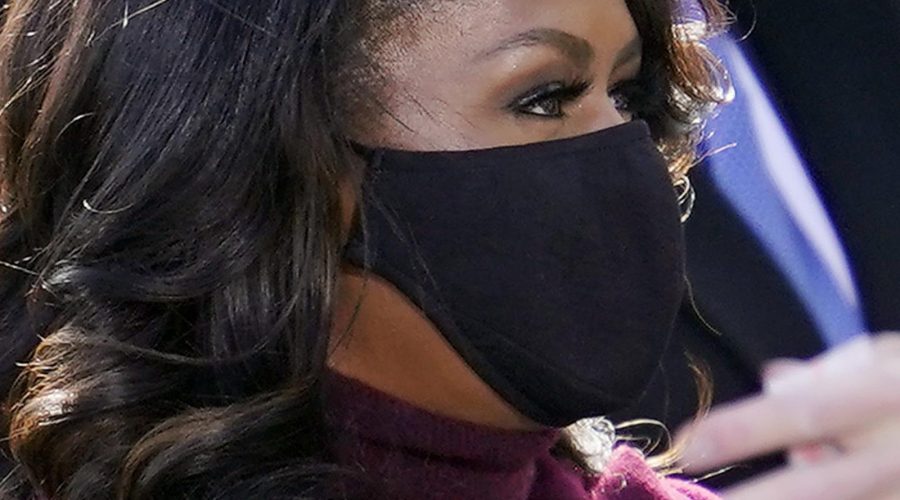 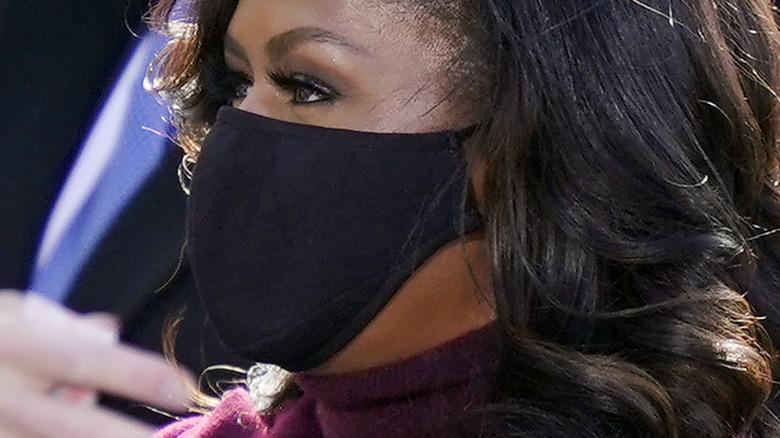 Former first lady Michelle Obama captivated viewers watching President Joe Biden’s inauguration ceremony in January for her timeless elegance. Mrs. Obama’s smoky eyes and defined eyebrows did all the talking as she wore a black face mask and statement-making plum outfit. Mrs. Obama’s makeup artist Carl Ray told Elle, “I started thinking about the look weeks in advance. I knew she would be wearing a mask and a monochromatic outfit. I wanted her to have a powerful beauty look that would need to be achieved by playing up the top half of her face.” So focusing on eyebrows and eyes were especially important in framing the face.

Ray did not reveal the foundation he used on Obama as it is still a secret, but he did say he used NARS Radiant Creamy Concealer and that he contoured her face with Fenty Beauty Matte Matchstix, per Elle. He then used Iconic London Illuminator Liquid Highlight to play up Michelle Obama’s natural glow and set her complexion makeup with Laura Mercier Translucent Loose Setting Powder.

Anastasia Beverly Hills (ABH) is most famous for their eyebrow products, so it should be no surprise that Ray used nothing but the finest eyebrow products on Obama for Inauguration Day 2021. Ray used the DipBrow Gel, Brow Definer, and Clear Brow Gel from ABH to give Obama bold eyebrows that are fit for a lady-boss.

How to get Michelle Obama's eye look 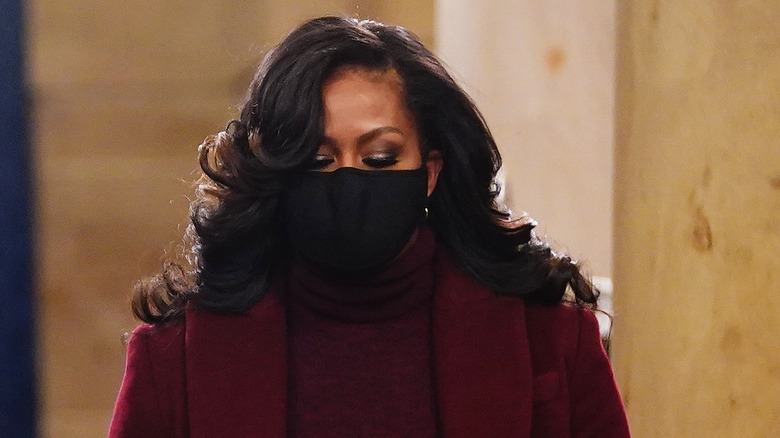 For Michelle Obama’s inaugural day eye makeup, stylist Carl Ray used the taupe and black shades from the Viseart 01 Eyeshadow Palette, which is a neutral matte color story. In the center of her lids, Ray added Pat McGrath EYEdols eyeshadow in Divine Mink, a purple-based taupe metallic shade. He finished her eyes with Pat McGrath PermaGel Eyeliner Pencil in Xtreme Black on Obama’s waterline and upper lash line, and topped the upper lash line with Fenty Flyliner to add some drama (via Elle and InStyle). Ray completed the look by using Glossier Lash Slick Mascara on her eyelashes, and applying Lily Lashes 3D Miami in Faux Minx for an added pop (via InStyle).

If you want to replicate Michelle Obama’s elegant and radiant look from the 2021 presidential inauguration on a budget, there are a few affordable dupes you can try out. Allure recommends Maybelline Hyper Easy Liquid Eyeliner as one of the best waterproof eyeliners out there. In fact, celebrity makeup artist Erin Parsons uses the liner to create sharp, pitch-black lines.

For brows, you can use the tinted ELF Wow Brow Gel and/or the Maybelline Clear Brow Gel to set your brows in place, per the Chicago Tribune and Who What Wear. There are plenty of highly rated mascaras and false lashes at the drugstore as well that can make your eyes stand out. Glamour recommends L’Oreal Bambi Eye Mascara for doll-like eyes, while Bustle suggests the Ardell Demi Wispies that are available on Amazon as a pack of 5 lash pairs for $10.