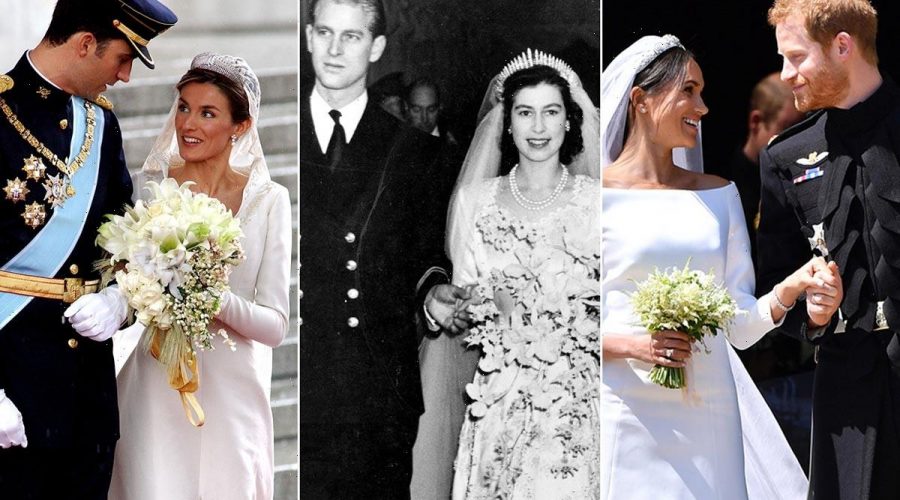 When it comes to buying a wedding gift for the royal family, a gravy boat just isn’t going to cut it. But in a bid to find the perfect present, some people have come up with weird and wonderful ideas, from the Duke and Duchess of Cambridge‘s tandem bike to the Queen and Prince Philip’s ton of peat.

We’ve rounded up the most unique wedding gifts received by the royals with a little help from Veritas Gifts, independent corporate gifting specialists who hold a royal warrant to the Queen.

Boris Johnson was acting as Mayor of London at the time of Prince William and Kate’s wedding in April 2011, and gifted the newlyweds a tandem bike in the style of his infamous ‘Boris Bikes’. “I look forward to seeing the newlyweds on tandem wheels as they start their new life in Anglesey,” he told a crowd in Trafalgar Square on the wedding day. It isn’t known what the couple have done with their special bike – or if they’ve ever been out on it.

WATCH: 7 of the most expensive royal weddings of all time

The Queen is often very generous when it comes to her wedding gifts, as she has given several members of the royal family the keys to royal residences. When Prince Edward and the Countess of Wessex tied the knot in 1999, Her Majesty gifted them Bagshot Park in Surrey, which is rumoured to have a whopping 120 rooms. The couple share the mansion with their two children Lady Louise and James, Viscount Severn.

The Duke and Duchess of Sussex would no doubt have been surprised – and pleased – to hear that Peta India adopted an Indian bull who had been found weak and injured, on their behalf. Aptly named Merry (a hybrid of Harry and Meghan), the bull will spend the rest of his life relaxing in a peaceful sanctuary in Maharashtra, India. Maybe Prince Harry and Meghan will be able to visit one day!

RELATED: Where to buy an antique or vintage engagement ring – and the best styles to shop

One ton of peat

Prince Charles is known for his interest in agriculture, so the local village council in Somerset opted to send him one ton of high-quality peat to use on his Gloucestershire estate, Highgrove, following his wedding to Princess Diana.

Talk about setting the bar high! Prince Rainier of Monaco and Princess Grace Kelly received a yacht called the Arion for their wedding gift from Aristotle Onassis in 1956. Princess Grace used the vessel to entertain important guests on day-long Mediterranean excursions, and it was purchased by Quasar Expeditions in 2006.

Crown Prince Frederick and Crown Princess Mary of Denmark received an extra-special wedding gift for their summer home by the Danish municipality of Sonderborg – a tennis court!

Although they had asked for charitable donations in their name instead of wedding gifts, Prince William and Kate were given a Land Rover following their wedding. However, they held a draw at Clarence House to donate the vehicle to a new lucky recipient, who ended up being the Patterdale Mountain Rescue Team.

GALLERY: 8 royal wedding venues and residences where you can marry too

Prince Carl Philip of Sweden and his wife Princess Sofa were given a two-seater kayak by the Swedish government on behalf of the people of Sweden following their wedding in 2015. But that’s not all; the couple – who are known for their love of the outdoors – also received their very own nature reserve in Vӓrmland in which to try it out.

A HUGE wheel of cheese

After their wedding in 1840, Queen Victoria and Prince Albert were presented with a 1,000-pound cheese wheel. The block of cheese weighed over 500 kilograms and was made from the milk of 750 cows. The Queen accepted the present but the farmers who made the cheese then asked for it to be exhibited. Sadly after the exhibit was over, the Queen refused to take it back.

A giant jigsaw puzzle of the King and Queen

We love this idea! When Felipe, Prince of Asturias married Letizia Ortiz Rocasolano in 2004, they received a giant jigsaw puzzle from the people of Oviedo. The unique puzzle featured their portrait, and had been assembled by visitors to a local shopping centre.

The ingredients for a wedding cake

Wartime rationing was still in place when Queen Elizabeth II and Prince Philip married in 1947. However, they were still able to have the perfect wedding cake thanks to the Australian Girl Guides Association, who provided the couple with all of the ingredients they would need.

29/05/2021 Celebrities Comments Off on 11 most unusual royal wedding gifts: Meghan Markle, the Queen and more
Lifestyle