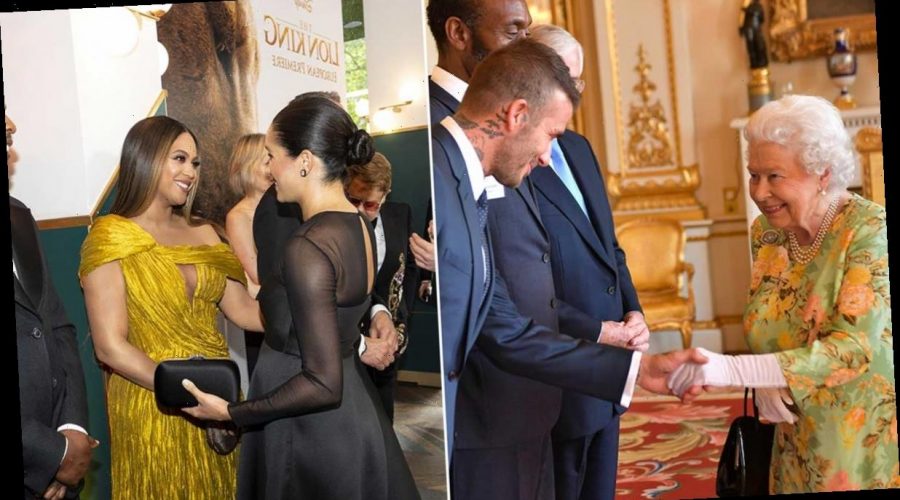 Members of the royal family and celebrities have two very different lives, but both run in similar circles, meaning from time to time their worlds collide and when they do it makes for a pretty incredible photo opportunity!

From Kylie Minogue to Robbie Williams, here are our favourite snaps of the royal family meeting celebrities, because let’s face it, who doesn’t love seeing royals rub shoulders with the biggest names on the red carpet? We wonder who was more starstruck…

Anna Wintour and the Queen

The Queen looked thrilled to be sat next to Vogue editor-in-chief Anna Wintour as they viewed Richard Quinn’s runway show. The pair went on to present him with the inaugural Queen Elizabeth II Award for British Design at London Fashion Week’s BFC Show Space in February 2018.

The world went wild when the Duke and Duchess of Sussex met Beyoncé and husband Jay-Z for the first time at The Lion King premiere in July 2019. Meghan and the American singer warmly embraced each other, with Beyoncé congratulating her on the birth of baby Archie, saying: “The baby, so beautiful. We love you guys.” Jay-Z also gave the royal couple some parenting advice, telling them: “Always find some time for yourself.”

David Beckham and the Queen

David Beckham has been lucky enough to have had many interactions with Her Majesty over the years, from receiving his OBE at Buckingham Palace in 2003 to personally being greeted with a handshake at the yearly Queen’s Young Leaders Awards. This photograph was taken in June 2018, from the fourth year of the programme, which celebrates the achievements of young people from across the Commonwealth looking to improve the lives of other people. The father-of-four has been involved with the project that celebrates exceptional young people since 2014.

READ MORE: All the times Kate Middleton has shared her personal photos of Prince George, Princess Charlotte and Prince Louis

For one of Prince Harry’s final engagements as a senior royal in February 2020, he teamed up with Bon Jovi singer Jon Bon Jovi at London’s famous Abbey Road studios.

The US rock star recorded a special single in aid of the Invictus Games Foundation, and he cheekily teased a duet with the Prince in the recording booth. Harry and Jon even recreated The Beatles’ famous Abbey Road album cover by posing for a snap on the zebra crossing.

Reese Witherspoon and the Duchess of Cambridge

Reese Witherspoon opened up about how she "immediately fell" under the Duchess of Cambridge's spell after meeting her in person in 2011. The actress was invited to attend a fundraiser in LA with Prince William and Kate, when the royals were on their first long-haul official tour as newlyweds. Dedicating a page in her book Whiskey in a Teacup to Kate, she explained: "She did not disappoint! She was just lovely and warm, elegant and composed." We couldn't agree more!

The name’s Bond, James Bond! Former 007 star Pierce Brosnan got to meet Prince Charles at the Prince’s Trust awards in March 2020. They were joined by James Norton, who has previously been tipped to become the next James Bond, and British actress Anna Friel.

When royalty, the Duke of Edinburgh, and Hollywood royalty, Tom Cruise, met during a dinner to mark the 75th anniversary of Outward Bound Trust at Buckingham Palace in March 2017, royal fans couldn't get enough of their unlikely interaction. This snap shows the pair having an animated conversation, where the duo appear to get on like a house on fire. The palace did not publicise the event, but explained Tom was invited "as a supporter of the Outward Bound Trust". Philip was in attendance as patron of the organisation, a role he has held since 1999.

Lady Gaga, Prince Charles and the Duchess of Cornwall

Attending the Royal Variety Performance in London, the Duchess of Cornwall was introduced to Lady Gaga. Camilla, who was at the event with Prince Charles, smiled and told the American singer: “My grandchildren call me Gaga.” We love this photo of the unusual pairing chatting over their shared nickname!

Alexa Chung and the Duchess of Cambridge

Alexa Chung had a friendly meeting with Kate during the 2017 Portrait Gala in London, and the designer even took her dad for support, meaning Phil Chung also got to meet the Duchess of Cambridge – possibly the best present you could ever give your father?

MORE: Kate Middleton’s celebrity friends revealed – and some may surprise you

Ant and Dec and Prince Charles

The Prince of Wales is snapped here speaking to Celebrity Trust Ambassadors Ant and Dec at The Prince's Trust Awards at The London Palladium in March 2018. The duo have met the Prince plenty of times, even filming a unique documentary, When Ant and Dec Met The Prince: 40 Years of The Prince's Trust in 2016, where the pair were given unprecedented access to His Royal Highness. The 90-minute special saw the much-loved presenting pair follow the Prince of Wales on several engagements for the trust, chatting with him along the way and meeting those who have directly benefited from the charity. Could the successful duo become a trio?

Pop sensation Kylie Minogue is pictured here having a chat with Prince William during a reception for the Royal Marsden NHS Foundation Trust at Buckingham Palace in June 2018. Kylie is no stranger to rubbing shoulders with the royals having performed at the Queen’s 92nd birthday in April of the same year, but this event was particularly touching for the star who was diagnosed with breast cancer in 2005. Speaking at the reception, Prince William explained to the guests how important the hospital was for enhancing the treatments available for cancer victims: “The Royal Marsden ensures that doctors, nurses and research teams can develop life-saving treatments and provide the very best of care – I simply cannot thank you enough.”

Prince William and Prince Harry are pictured here alongside Kanye West and P Diddy, at the reception of a concert in memory of Diana, Princess of Wales, at Wembley Stadium in London, 2007.

The actress met the Prince of Wales at a reception hosted by the Duchess of Cornwall and himself in July 2013 to support a charity working to save the Asian Elephant from extinction in the wild.

Princess Eugenie couldn’t stop smiling when she met The Matrix star Keanu Reeves at the UNAIDS Gala during Art Basel 2016, in Switzerland.

Friendship never ends! Geri Horner – formerly Geri Halliwell of the Spice Girls – first met Prince Charles nearly 20 years ago when she was Ginger Spice in the girl group, right. In March 2016, she was reunited with her old friend at the Prince's Trust Celebrate Success Awards, left.

These two are a match made in heaven with both the Harrys having cheeky personalities that would make them the best of friends. In this photo, taken in July 2017, the singer chats to Prince Harry at the Dunkirk World Premiere at Odeon Leicester Square. Also, on hand for the meet-and-greet, were One Direction heartthrob Harry's co-stars in the film, Jack Lowden and Aneurin Barnard.

Nick Grimshaw and Claudia Winkleman attended the Prince’s Trust Celebrate Success Awards in March 2017. According to the Prince’s Trust website, the ceremony was to “celebrate the achievements of young people who have succeeded against the odds and improved their chances in life.” The show was hosted by Ant and Dec and the cast of School of Rock performed at the ceremony.