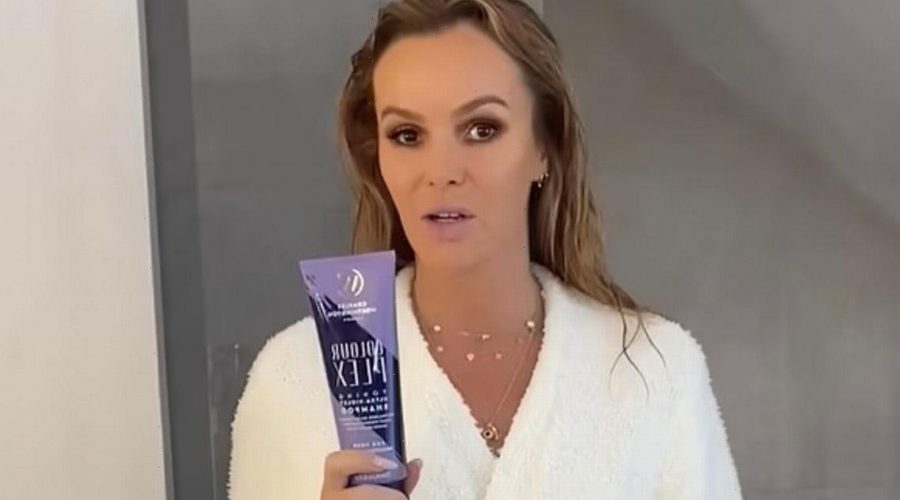 Amanda Holden left followers shocked after she suffered a wardrobe malfunction in a new video on Friday.

The 51 year old revealed more than intended in the clip as she promoted a shampoo product in a sponsored advert on Instagram.

Amanda was seen in the video at first wearing a white bathrobe, before she slipped it off and quickly transformed into a glamorous gold and black fitted dress.

Amanda captioned the clip: “This is my go-to product. Especially when I'm planning on going out for the evening."

Fans didn’t pay much attention to the product discussed in the advert however, as they noticed that Amanda had flashed herself while turning to the side, mid-change, in the video.

Followers flocked to the comment section to point out the blunder to the Britain’s Got Talent host, following the startling post.

One person wrote: “Urm, did she just flash?”

A second wondered the same, as they said: “Was that an intention nip slip? Hope Insta don’t pull your account @noholdenback”.

Someone else commented: "Lovely dress but the transition needed to be more careful”.

“Definitely a nip slip there…maybe work on the editing,” another person wrote.

Amanda uploaded the cheeky video as part of paid partnership with Charles Worthington.

The BGT panellist has received backlash in the past for revealing a bit too much skin.

In 2017, Amanda wore a daringly low-plunging gown designed by Julien Macdonald on the ITV talent show, which garnered 663 complaints from viewers.

Amanda laughed off the negative reactions at the time, as she said: “That dress was hysterical — it was Julien Macdonald. I had bits of fish wire underneath my breasts trying to hold that together.

"But, look, I'm from a small-chest family, plus you know I'm 48 years old. It's all quite laughable, but all everyone seems to talk about."

The radio presenter added: "It's been called another national ­crisis — but, oh no, I will not be covered up.”

Earlier this month, Amanda revealed that she goes a step too far with her daring outfit choices as she often tries on her 16 year old daughter Lexi’s skimpy wardrobe.

Amanda told The Sun: "There’s this sequinned…I wouldn’t even call it a bikini top. My daughter’s 16!

"I went, 'No, you’re not wearing that to Reading Festival, but Mummy can have it,' so Mummy’s got it, and waiting for a moment to wear it.”