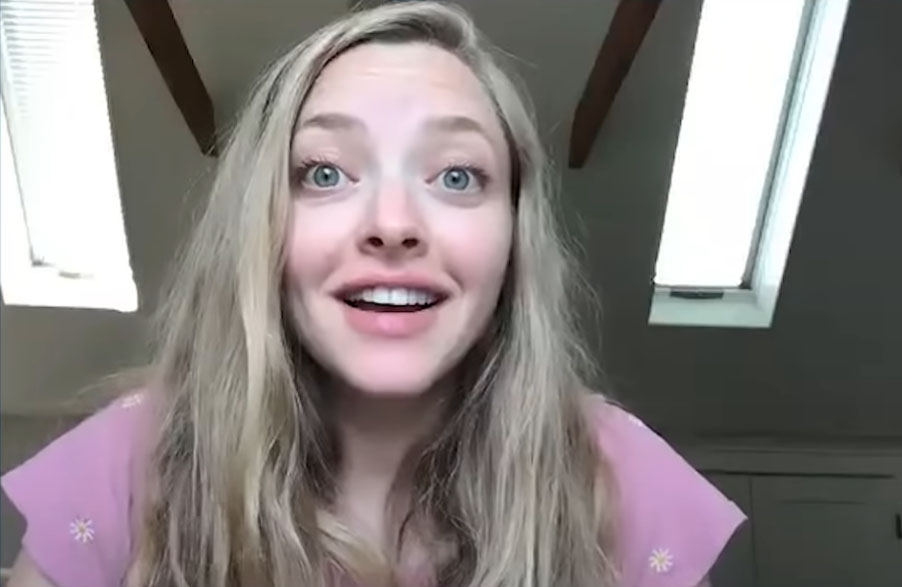 Amanda Seyfried lives on a farm in upstate New York with her husband of three years, Thomas Sadoski, and their three-year-old daughter, whose name they have not revealed. (You can google it, but I think it was only published once by People and deleted, so I’m not going to post it.) Amanda is not talking out of both sides of her mouth when it comes to her daughter. She’ll post a photo of her daughter with her face hidden, but she’s not like Kristen Bell and Dax Shepard telling embarrassing stories about her while asking for privacy. She’s not cashing in on her mom image either. I appreciate that about her.

Amanda did an interview with John Molner, Katie Couric’s husband, on his Molner’s Table show. She said that her mom lives with her family and is her nanny. She was so grateful-sounding about that. Plus she very plainly trashed Trump without using his name and I’m always here for that. Here’s some of what she said and you can see the video below:

“Any role you turned down and regret it?”
Do I regret it? Maybe I don’t regret it but my agents sure do. Guardians of the Galaxy.

On her farm and daily routine
I live upstate [in New York] on a farm, it’s what I always wanted. I put roots down in 2014 here and now, with this pandemic, we’ve been able to just stay.

I usually get up around 8:30 to feed the animals. My mom lives with us, she’s our nanny. My life is awesome because she is the third parent for us. I am so lucky, I know I am. So when my daughter gets up she either comes in our room or she goes downstairs. If we’re still sleeping it’s great because she can hang out with my mom, she wakes up early.

Our family is still together [in] the pandemic. I definitely think my marriage is even stronger. This is hard for people.

“We messed this whole thing up [the pandemic]”
We? I’ve decided that I’m no longer a we. This isn’t on me. This is not on you. This is a “them.” I do think they are allowing people to perish for the sake of the election and that’s a fact.

“Katie [Couric] hosted this reunion of Parent Trap. She had Lindsay Lohan. Has there been a Mean Girls reunion?”
No, I don’t know why. There’s no time like the present. That would be really fun to do. Lacey [Chabert] and I keep in touch. Lacey was really my first close friend in Hollywood. And Danny [Franzese] and Jonathan [Bennett]. It would be really nice we could [do that].

[From Molner’s Table via People]

Amanda’s comments about her mom remind me of Elizabeth Warren’s speech for the DNC this year. She explained how, as a young mom, she thought she would have to give up her job as a teacher because she couldn’t take care of her babies and work. Her aunt Bee moved in and stayed for 16 years! In another segment at this year’s DNC a Texas firefighter was part of a panel of working people talking to Joe Biden about the American dream. (That’s at 1:10 into Day 4.) He was a single dad and said something similar, that his retired parents were helping him raise his daughter and that he wouldn’t be able to work without their help. That’s how we used to raise kids, with inter-generational help, but things have changed and the childcare crisis has been made so much worse by the pandemic.

Also I completely agree with her about this administration deliberately killing people, but you already knew that.

These sweet moms raised me. #happymothersday 🌸

These sweet moms raised me. #happymothersday 🌸

All made up and nowhere to go but back onto the couch to watch Frozen 2. Thanks for the chat, @lisaeldridgemakeup! And thanks for everyone who joined us!

24/08/2020 Celebrities Comments Off on Amanda Seyfried: ‘My mom lives with us and is the third parent for us’
Lifestyle