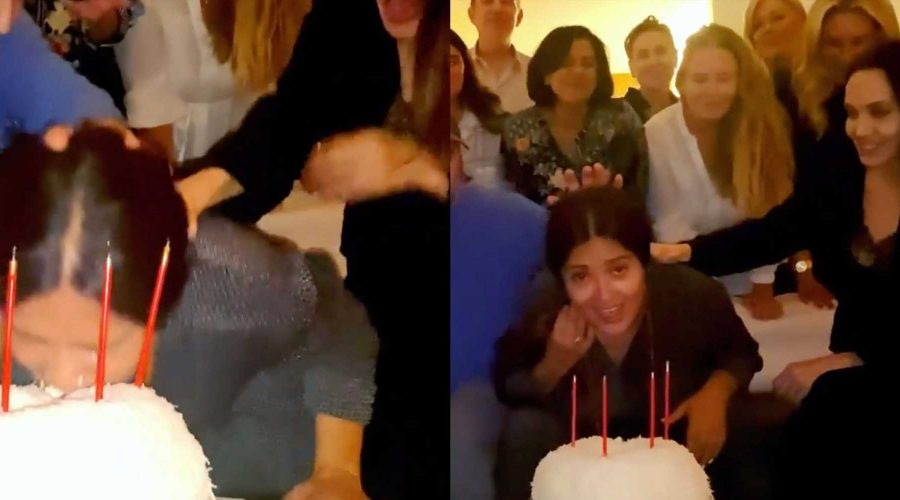 Looks like Angelina Jolie and Salma Hayek are the newest Hollywood friendship.

The Frida actor shared a video of herself celebrating her 55th birthday last Wednesday, which showed the Maleficent actor attending the gathering among Hayek’s family and friends. In the clip, Jolie is hesitant as Hayek shows her how to perform the Mexican tradition “mordida,” when the celebrator’s face is pushed into their own birthday cake for their first bite.

Jolie wears a black suit with a lace camisole in the clip, while Hayek is dressed in a metallic jumpsuit and black ankle boots. Eventually Jolie pushes her Eternals co-star’s face into the cake, as the other attendees chant “Mordida!”

The Hitman’s Bodyguard actor marked her 55th birthday with a post of herself standing on a tropical beach in a blue halter-neck one-piece swimsuit. “Happy 55th birthday to me 💃🏻 looking forward to new adventures #grateful,” she wrote in the caption.

Jolie and Hayek appear to have become close friends while filming director Chloe Zhao’s upcoming MCU film, Eternals. Hayek gushed about her experience filming with the cast on Instagram in December 2019, in the caption for a selfie of herself, Jolie, and The Lovebirds actor Kumail Nanjiani.

“Gosh am I so lucky… I thought I was just going to be working with great actors playing aliens; little did I know, I was going to befriend amazing human beings,” she wrote.

She also showed sent some birthday love to Jolie for her 46th birthday in June, referring to the humanitarian as her “Eternal sister.”

The Girl, Interrupted actor joined Instagram herself last month, where she shared an image of a handwritten letter from a teenage girl from Afghanistan, according to the post. She also reflected on her past humanitarian work in the country, and expressed her desire to help Afghan women and girls amid the current Taliban takeover.

“Watching for decades how Afghan refugees – some of the most capable people in the world – are treated like a burden is also sickening. Knowing that if they had the tools and respect, how much they would do for themselves. And meeting so many women and girls who not only wanted an education, but fought for it,” she wrote.