Armie Hammer’s separation from his wife is anything but easy. The 34-year-old actor covers the November issue of British GQ and, in the accompanying interview, opens up about his split from his wife of 10 years, Elizabeth Chambers. The couple, who announced their separation in July, share two children, Harper, 5, and Ford, 3.

“I don’t think you’ll find anyone in the world who would ever say what I’m going through is an easy thing to go through,” he says. “It’s not about whether it was your idea or not, or whether you think it’s the right idea or you don’t. Either way, a separation like this is a seriously seismic event in someone’s life.”

“There’s a lot of shifting and a lot of growing pains and a lot of changes. Change is a universal constant. I mean, change is not a bad thing always, but that doesn’t mean it’s painless,” Hammer continues. “Elizabeth and I are two adults making this decision and the priority is how do we do it in a way that affects our children the least? Or, at least, how do we help get them through this in a way that mitigates as much consternation or fear or damage on their part, you know?”

Prior to the announcement of their split, Hammer, Chambers and their children were quarantined in the Cayman Islands with the actor’s father and stepmother, an experience that wasn’t totally positive.

Hammer notes that the “very complicated, intense situation” was exacerbated by having “big personalities all locked in a little tiny place.”

“It was tough, man. I’d never dealt with anything like that before in my life, so I didn’t have the tools,” he says. “It was just this thing that snuck up on everybody. I don’t think I handled it very well. I think, to be quite frank, I came very close to completely losing my mind. I just felt completely powerless.”

“I was on an island where the lockdown was so severe that mail couldn’t even come in. I felt so intensely trapped, like a wolf who got caught in a snare and wants to chew his own foot off,” Hammer continues. “I was just like, ‘I can’t do this. Get me out of here.'” 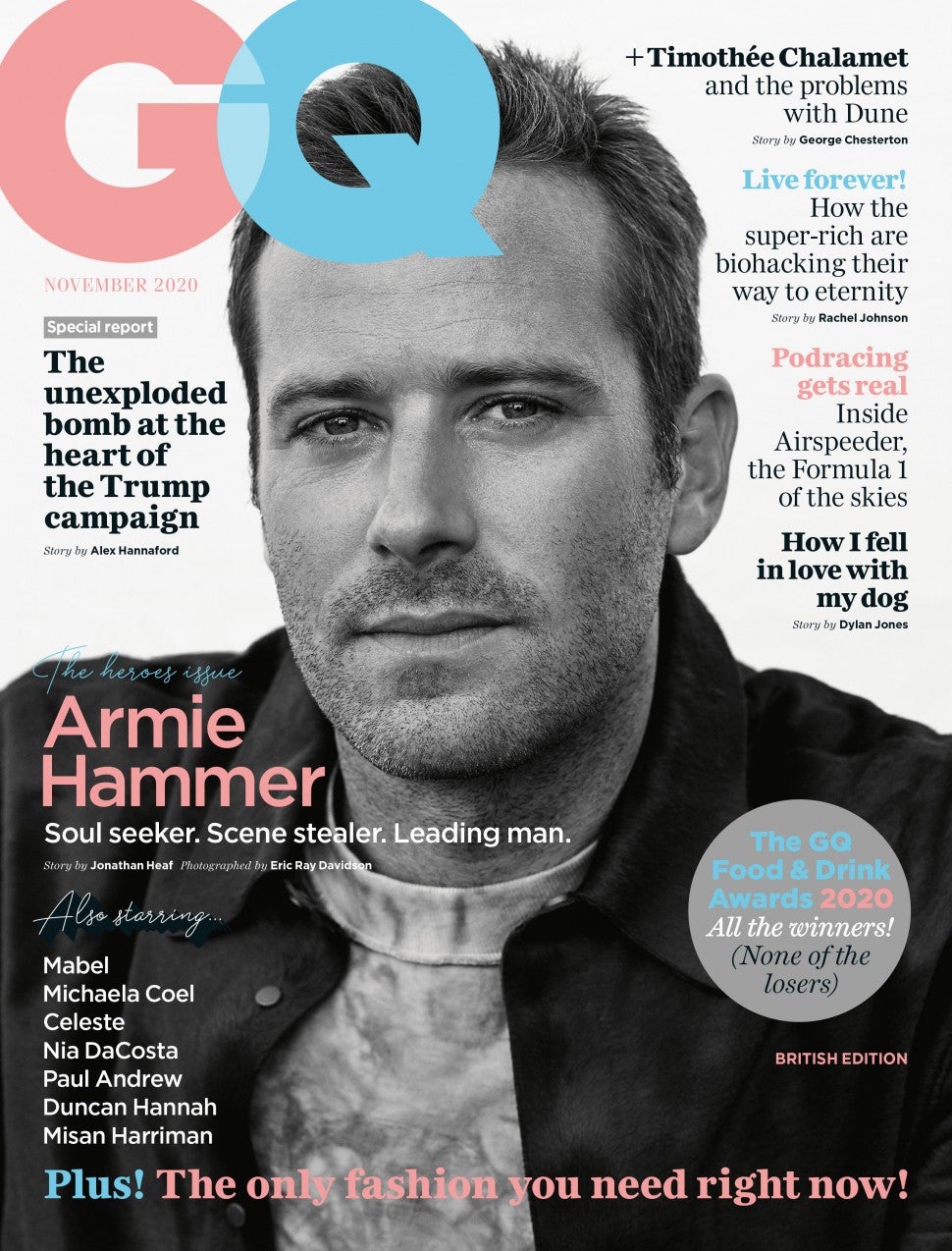 The feeling that he was “not doing a very good job” of handling the situation on his own led him to seek therapy.

“I just started talking to a therapist, twice a week. It just sort of regulated everything and gave me the tools for dealing with things. It gave me a fresh perspective and it was incredibly helpful,” he says. “I’ve been in therapy before, but this was a dire situation. And now I just think everyone needs to be in therapy, period, across the board. Everyone needs to be talking to someone and if you’re not, you’re doing something wrong.”

Hammer’s insistence on maintaining his therapy schedule has been “good” for him.

“Once you actually start and someone goes, ‘Well, what’s going on with you? How are you doing?’ the flood gates open and I can’t shut up. It’s good to get that s**t out, man,” he says. “Also, you feel less isolated. And you’re able to put things in perspective; they grab your shoulders and turn you towards what is important so you can see it clearly. And you go, ‘Ah, now I see it.’ The therapy I had was more crisis therapy, as opposed to self-work therapy.”

In addition to therapy, Hammer has made it a point to stay connected to loved ones amid quarantine, a practice he was especially grateful for after one friend shared suicidal thoughts with him during a call.

“He told me his girlfriend broke up with him, COVID is destroying his business… And I think he felt completely alone and overwhelmed by it,” Hammer says. “As soon as you talk to someone, you’re lightening the load — immediately it feels better.”

“There’s such a stigma around talking about mental health. Look, man, if I had called that guy and he didn’t tell me how he was feeling, I would have never known. I would have just had, like, a ten-minute conversation with him and then got off the phone and who knows what he would have done?” he continues. “He told me he had been talking about killing himself all morning. At the end of the day, I don’t think I did anything anyone else wouldn’t have done.”

On the career side, Hammer is gearing up for the release of the thriller Rebecca, as well as the mystery flick Death on the Nile. Another project that’s likely on fans’ minds is Find Me, the previously announced follow-up to 2017’s Call Me by Your Name. Though people are eager for the movie, Hammer’s knowledge of its progress is minimal.

“I haven’t even read the book. I know [director] Luca [Guadagnino] hasn’t got a full script yet, although he knows what he wants to do with the story, so I don’t know how similar or dissimilar it will be to Find Me the novel,” Hammer says. “I know if we end up doing it, it’s more important for me to focus on Luca’s vision than to focus on Find Me. The book will be a supplemental thing.”

Watch the video below for more on Hammer.