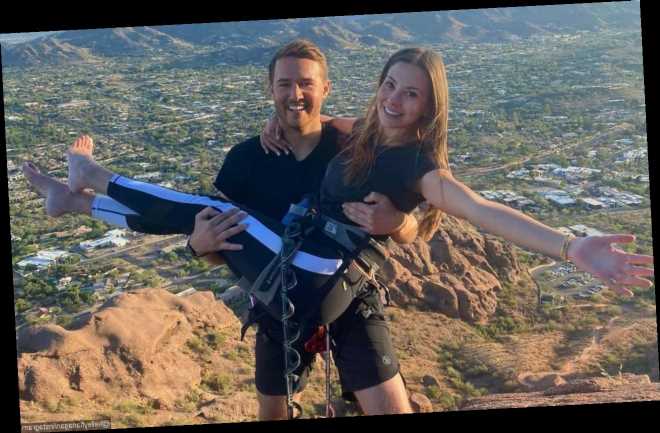 The pilot allegedly ‘was the one who ended it with Kelley’ as a source claims that the then-couple ‘had been fighting a lot’ following their move to New York City.

AceShowbiz –Peter Weber has ended his romance with Kelley Flanagan. Around one week after he and his now-ex-girlfriend relocated to New York City, “The Bachelor” star was reported to have called it quits with her because the relationship has turned to be “very stressful” for them.

“Peter ultimately was the one who ended it with Kelley, but she 100 percent agreed that they needed time apart,” a source told E! News about the breakup. “They had been fighting a lot, and the move was very stressful and put a lot of pressure on them. They spent the holidays apart, and Peter is already back staying with his parents in L.A. for now.”

The 29-year-old pilot himself announced the split via Instagram on Thursday, December 31. Sharing a picture of them enjoying a romantic sunset during a hike, he wrote, “Love is a funny thing. It can make you you feel on top of the world and it can make you feel a pain you wish didn’t exist. I’m here to share that Kelley and I have decided to go our separate ways.”

“While our relationship was filled with countless beautiful memories, our relationship simply didn’t work out in the end,” he continued. “Kelley is someone I will always have a special love for. Someone I have learned more from than she will ever understand. Someone I am so thankful came into my life and someone who I will always wish all of life’s greatest blessings on.”

The TV personality ended his lengthy message by stating, “These moments in life always hurt, but in my opinion that shows you it was worth the time you spent together.” He then added, “Thank you Kelley.”

Peter and Kelley, who landed in the fifth place on his season of the dating show, became an item in April 2020. He had previously been in a brief engagement with winner Hannah Ann Sluss, and had a relationship with runner-up Madison Prewett.

Back in May, Peter opened up about why he chose to date Kelley. “To be completely honest, I think just the nature of the show definitely works and I’ve said that since day one. I still believe it works, but I think specifically for the type of relationship between, you know, Kelley and myself just wasn’t the most organic type of situation for us if it was going to actually work,” he shared in an Instagram video posted on the Bachelor Nation fan account.