‘It made me sad’: Bella Hadid says she wasn’t allowed to grow up in ‘Muslim culture’ after her parents divorced because mom Yolanda ‘extracted’ her from her Palestinian family and moved her to California – where she was BULLIED for her Arab heritage

Bella Hadid has opened up about her ‘sadness’ at being denied the opportunity to grow up in ‘Muslim culture’ with her Palestinian father Mohamed, saying she was ‘extracted’ from that side of her family when her mother Yolanda moved her to California following her parents’ divorce.

She was born in Washington, D.C., where she spent the first four years of her life growing up around relatives from her Palestinian side.

But after her parents split when Bella was four, she and her siblings – Gigi and Anwar – relocated to Santa Barbara, California, with their mother.

Speaking to GQ in a new interview, the half-Palestinian star explained that she yearned for a chance to explore that side of her history after moving to the West coast.

She said she would have loved to have studied and practiced the religion as a child, but ‘wasn’t given that’ opportunity.

Bella added that was often the only Arab girl in her class at school, which resulted in her being regularly subjected to racist bullying and left her feeling ‘sad and lonely.’ 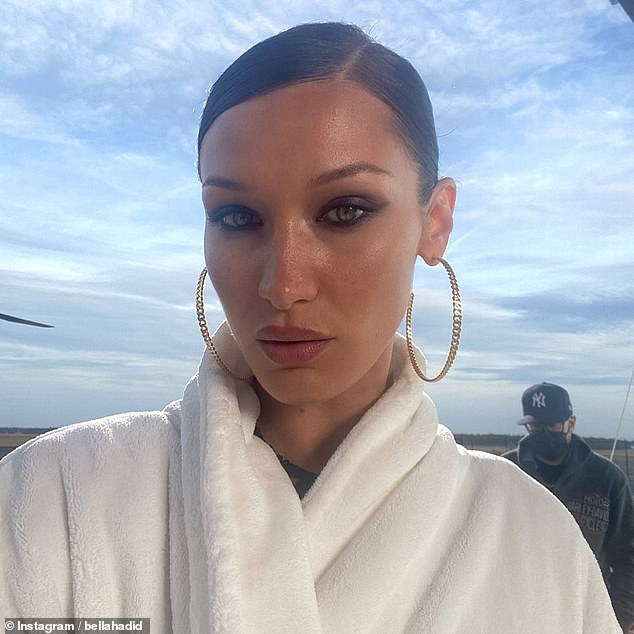 Candid: Bella Hadid has detailed how she felt she was denied the opportunity to grow up in a ‘Muslim culture’ with her Palestinian father after her family was ‘extracted’ to California

‘I was with my Palestinian side [of the family in D.C.]’, she said. ‘And I got extracted when we moved to California.

‘I would have loved to grow up and be with my dad every day and studying and really being able to practice, just in general being able to live in a Muslim culture, but I wasn’t given that.’

She added of her upbringing in Santa Barbara, where she faced ‘racist name-calling:’ ‘For so long I was missing that part of me, and it made me really, really sad and lonely.’

Bella is set to make her acting debut in the Hulu series, Ramy, and has now revealed that the role reignited her desire to embrace her heritage, which she was denied following her parents’ divorce.

Bella went onto reveal that while she was filming the series Remy she was brought to tears when the crew surprised her with a Free Palestine T-shirt.

‘I couldn’t handle my emotions,’ she added. ‘Growing up and being Arab, it was the first time that I’d ever been with like-minded people. I was able to see myself.’

She added that her friendship with the show’s star Ramy Youssef helped her to feel more comfortable exploring her faith.

Back in May, Bella attended a pro-Palestinian protest in New York City,

Earlier this Bella admitted that she regretted undergoing a nose job at the age of 14, telling Vogue: ‘I wish I had kept the nose of my ancestors. I think I would have grown into it.’

Bella went on to note that the criticism of her looks made her feel as though she wasn’t worthy of being deemed a supermodel.

She explained: ‘I’ve had this impostor syndrome where people made me feel like I didn’t deserve any of this. People always have something to say, but what I have to say is, I’ve always been misunderstood in my industry and by the people around me.’

Growing up with a supermodel for an elder sister didn’t help matters either, with Bella noting she had spent her life comparing herself to Gigi, 26. 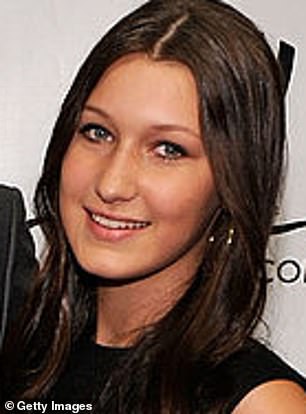 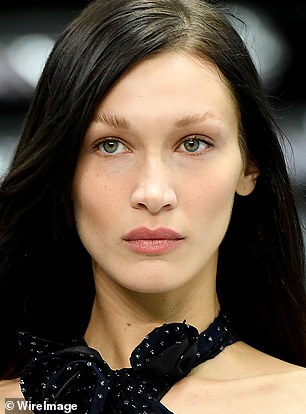 Revelation: It comes after Bella revealed she had a nose job at the age of 14 (left before the procedure in 2010) but now regrets it as she feels she would have ‘grown into it’

She explained: ‘I was the uglier sister. I was the brunette. I wasn’t as cool as Gigi, not as outgoing. That’s really what people said about me. And unfortunately when you get told things so many times, you do just believe it.

‘I always ask myself, how did a girl with incredible insecurities, anxiety, depression, body-image issues, eating issues, who hates to be touched, who has intense social anxiety—what was I doing getting into this business? But over the years I became a good actress.

‘I put on a very smiley face, or a very strong face. I always felt like I had something to prove. People can say anything about how I look, about how I talk, about how I act. But in seven years I never missed a job, canceled a job, was late to a job. No one can ever say that I don’t work my a*s off.’

While Bella spent her teens growing up in Gigi’s shadow she admitted that she struggled to remember her earlier years due to ‘childhood trauma’, that she did not touch on further. 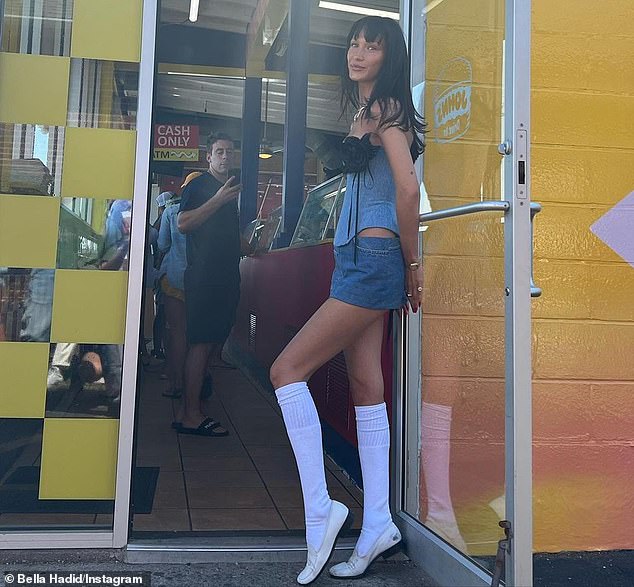 Difficult: Bella went on to note that the criticism of her looks made her feel as though she wasn’t worthy of being deemed a supermodel

As well as elder sister Gigi, Bella grew up alongside model brother Anwar, 22,on a ranch in Santa Barbara, California, before the family moved to Beverly Hills.

Bella suffered with mental health issues during her childhood, revealing she developed anorexia at high school.

Bella had been prescribed extended-release Adderall for her inattention, as doctors believed she had suffered with ADHD, but Bella claimed the appetite-​suppressant effect of the medication kickstarted an eating disorder.

While Bella says she now has a healthy relationship with food, she still struggles with dysmorphic feelings, admitting: ‘I can barely look in the mirror to this day because of that period in my life.’

The Hadid sisters have long had their diets scrutinized in public, with old episodes of The Real Housewives Of Beverly Hills showing the pair willing to do what it takes to become models. 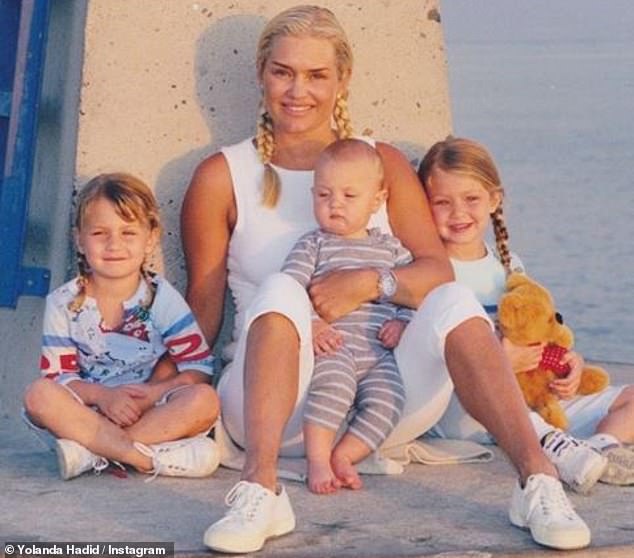 Memories: Bella said she struggles to remember her earlier years due to ‘childhood trauma’, that she did not touch on further (pictured with mother Yolanda, sister Gigi and brother Anwar)