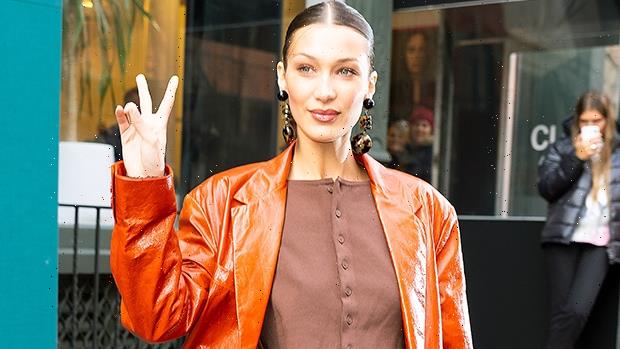 Bella Hadid and her new boyfriend can’t keep their hands off of each other! See the pics.

Bella Hadid and boyfriend Marc Kalman are growing strong in the French Riviera. The model, 24, and her new art director boyfriend were photographed aboard a tiny inflatable boat in Antibes, France on Friday, July 9, sharing a passionate kiss. Marc’s arms are wrapped around Bella’s waist in some of the snapshots; in others, the model is captured caressing her new boyfriend’s face. See the photos HERE!

The fervent PDA comes after Bella quietly debuted her new boyfriend on Instagram on Thursday, brazenly uploading a photo dump from Paris Haute Couture Fashion Week and the 74th annual Cannes Film Festival this week. The model captioned that she was “healthy, working and loved” in the photoset, which featured a blurry snapshot of her sharing a kiss with Marc in the last slide.

With the surprise IG debut in tow, a source told E! News on Friday that Bella is “completely smitten” with Marc, adding that the two “have been trying to keep it super low key and private.” The source said, “Now that they have become more serious, she has been excited to be seen with him. She is truly so happy right now.”

The duo apparently met in New York through work projects. The art director even has a connection to Kylie Jenner. Per Marc’s work portfolio, he has worked with Travis Scott via album art and merchandise branding. “He has been the creative behind many fashion projects and they have crossed paths several times,” the source told E!

Marc is Bella’s first public relationship since her split from The Weeknd, real name Abel Tesfaye. The two dated between 2015 and 2019, weathering an on-again, off-again relationship. Amid their first split, The Weeknd briefly and famously dated Selena Gomez in 2017, but after their split, The Weeknd and Bella rekindled their romance the following year. Their final split came in August 2019, but the duo appear to be on good terms.

A source told E! that “distance” factored into the decision to call it quits. “They are in different places right now, physically and mentally,” the source explains. “Bella is prepping for her fashion week commitments and Abel is working on his music and his upcoming acting debut.” (The musician made his big-screen debut in the 2019 film Uncut Gems opposite Adam Sandler.)