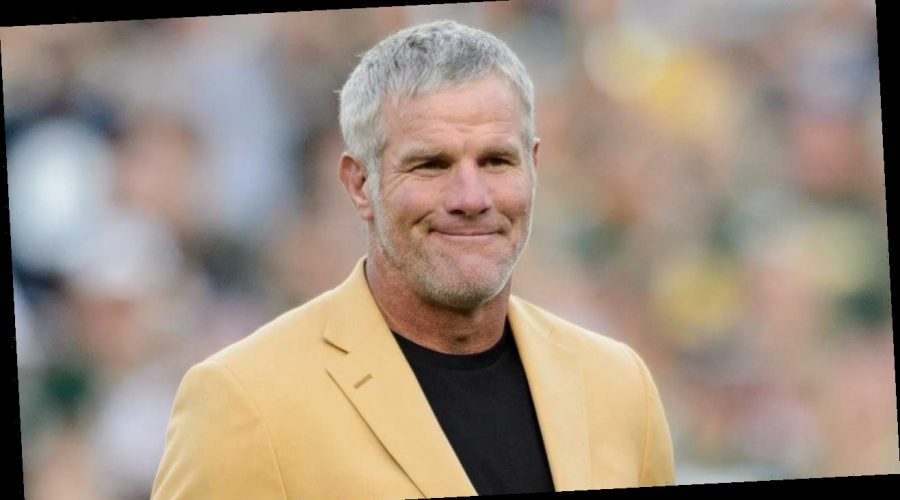 Brett Favre is opening up about his struggles with drug and alcohol addiction. During the latest episode of PodcastOne’s Bolling with Favre, which Favre co-hosts with Eric Bolling, the 51-year-old former NFL quarterback opened up to both Bolling and their guest, Dr. Phil, about his addictions to painkillers and alcohol, and shared what led him to get clean.

The three-time MVP, who spent the majority of his career with the Green Bay Packers and retired in 2010, previously talked about his drug and alcohol abuse in his 1997 memoir, Favre: For the Record, and again during a 2016 episode of the In Depth With Graham Bensinger podcast.

Favre’s addiction to painkillers began in earnest in 1994 when he took the pills after spraining his ankle.

“I had taken pain pills before that, not necessarily [for] football injuries. But when I first realized I liked a pain pill was after that Philadelphia game in ’94,” he said. “The next time I got injured,  [it] may have been three weeks later when I sprained my ankle, I don’t know if it was sprained enough to get pain pills. But I remembered the effect that it had had and I liked it. I thought, ‘What the heck? Why not?'”

That way of thinking led him to the point where he was taking two pills every day.

“I could get away with getting two a day because it was two,” he said. “Maybe the third day I would ask another player to get two pills, so I just didn’t ask the same person. Then you start learning to manipulate the system and you become very good at it.”

His two pills per day spiraled to taking a month’s worth of pills in just two days, a fact Favre called “crazy.”

“It became constant at the end of ’94 season, to where, when I went home, I was taking the pills,” he said. “Usually, after a month, two became three, three became four… It would only last four weeks and then I had to go up.”

When the next season started, Favre had a seizure the night before a game. While doctors at first thought that lack of sleep was to blame, they soon discovered the true cause.

“I’d never had a seizure before that. As they dug deeper, [the doctor] found out that I had an addiction to pain pills, but I didn’t tell him how much,” Favre said. “I said, ‘OK, I’ll stop taking them,’ but I continued to take them.”

That season ended with Favre undergoing ankle surgery. After the operation, he had a seizure in the hospital. “That scared me,” he admitted.

“My wife and my oldest daughter… were in the hospital when it happened,” he said of his wife of nearly 25 years, Deanna, and their now 32-year-old daughter, Brittany. The couple also share Breleigh, 21.

“When I woke up, there were doctors everywhere, and I was looking around, and I said, ‘What’s going on?'” Favre recalled. “They said, ‘You had a seizure.’ And I thought to myself, ‘Again?'”

That experience, Favre said, let him to “a come to Jesus” moment, and he decided to enter rehab. His time at the rehab center was contentious, though, and Favre only ended up staying because it was required by the NFL.

Though he did stay, Favre said he began “manipulating” the experience and figured out that he needed to “agree with what they’re saying.” When he got out, he said, “I continued to do what I was doing.”

The 1996 season became one of the most memorable of Favre’s career, as the Packers went on to win the Super Bowl. However, he was still struggling with his addiction throughout it all.

“[The league] said, ‘OK, if you need pain pills, we’ve got a non-addictive pain pill that you can take’… Let me tell ya, if you take 20 of ’em, it’ll work,” Favre said. “… That’s the addictive nature that I was going through. I tried them, I can’t say if it helped with pain or not, but I was taking a pain pill for effect. Eventually, I took 20 and I got a buzz. And so I fell right back into the cycle again.”

After his Super Bowl and MVP win, Favre was “as low as I could possibly be,” as he had only eight pills remaining, which would’ve given him “zero buzz.”

“I was low, and I said, ‘It’s one of two things; I die, or I flush these pills down the toilet,'” he recalled. “I contemplated it. I sat by the toilet for two hours. Eventually, I dumped the pills in the toilet, flushed them. I could almost want to kill myself because of doing that. I could not believe that I had actually done that. I was so mad at myself, because now what was I going to do?”

He detoxed cold-turkey, a decision he doesn’t recommend for anyone “because it could kill ya,” and spent two weeks shaking.

“It took me probably a couple of months to where I started getting over the, ‘I want these pain pills really bad.’ That urge,” he added. “The desire was there, but slowly but surely, by the grace of God, I got beyond [it].”

Unlike with pills, Favre wasn’t so sure he had a problem with alcohol, recalling that he thought, “I didn’t drink every day, so I don’t have a problem.” It wasn’t the frequency with which he drank, but rather what he did after he consumed alcohol that was cause for alarm.

“When I drank, did I drink one beer and go home? I thought, ‘What a waste. Why drink one beer? Why not drink 20?’ That’s a problem,” he said. “… Then you’re driving, or you’re making some other idiot decision, taking other drugs, street drugs, which I did all that.”

The day before he entered rehab for a second time, this time for alcohol, Favre vowed to quit cold turkey. However, at the insistence of his wife, he went back to the same center in Topeka, Kansas, that he had initially gone to for his drug abuse.