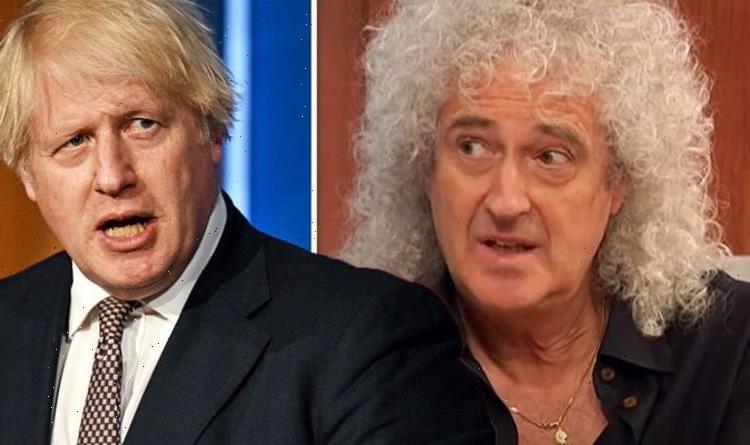 Brian May thanks fans for support following eye operation

Queen guitarist Brian May, 73, has taken to Instagram to fume over Boris Johnson’s decision to lift all remaining lockdown restrictions on July 19, despite warnings from doctors and scientists over the potentially “dangerous” move. In a lengthy post, the rock legend blasted the Prime Minister for his decision to abandon compulsory mask-wearing, imploring his followers to look at the science and data behind the recent surge of coronavirus cases.

I advise you all to ignore Boris’s reckless strategy

In view of his 2.8 million followers, the star branded the move to reopen in the coming weeks as a “catastrophically wrong decision”, as he implored his fans to wear their masks after July 19.

Brian wrote: “OK – I’m just a Rock Star, not an epidemiologist … But as I see it, this decision by Boris Johnson to abandon all restrictions this month is just another in the series of catastrophically wrong decisions he has made since the Covid outbreak began.

“I will be keeping my mask ON wherever possible – to protect myself and others around me.”

The musician went on to claim that the lifting of restrictions in the face of a new surge of cases was economically motivated.

He added: “In the face of this fast-growing new danger, I advise you all to ignore Boris’s reckless strategy – the result, as usual, of his caving in to pressure from influential business interests.

“Did I really hear him say he realised this move would cause more deaths, but he thought it was worth it? Those deaths could be in your family, or mine.”

The rock star asked his followers to look at the most recent coronavirus statistics, adding that being vaccinated doesn’t stop infections.

“Plus – think about it – the long-term effects of this new variant are UNKNOWN, and people who are double vaccinated are right now getting sick from it.”

The guitarist went on to blast the Conservative leader, claiming that he “doesn’t care” about the rising levels of infections ahead of July 19.

“The bombs are still dropping. And your prime minister doesn’t care,” he stated, before asking fans to “look at the figures”.

Brian went on to ask his followers to “protect themselves” and their loved ones, before acknowledging that his post would earn him “lots of flak”.

However, the musician said it was “worth it” if it saves someone from contracting the virus and getting “very sick”.

The star explained that he usually blocks social media users who troll his posts, but decided to make an “exception” for this post.

He added: “I want everybody to be able to see how much misinformation there really is out there,” before going on to thank his fans.

“But also I thank those of you who have been so supportive.”

He signed off: “Thank Heavens you seem to be the majority. Maybe there is hope after all. Bri.”

Following the lengthy post, the musician was inundated with support from his followers.

One wrote: “And that’s why we adore you, Brian.”

Another penned: “This is the message we need brian! Thank you for spreading science and love.”

While a third commented: “Louder for the people in the back Bri.”

08/07/2021 Celebrities Comments Off on Brian May: Queen star urges fans to ignore Boris reckless strategy ahead of Freedom Day
Lifestyle