Dave and Finn secured their place in the grand finale on last night’s semi-final episode of BGT.

However, despite delighting most viewers with another exhilirating mind trick, some fans of the show weren’t convinced.

PC Dave Wardell got Britain’s Got Talent  judges David Walliams, Simon Cowell, Amanda Holden and Alesha Dixon to look at hero police dog Finn and pick a time, a word, a number and a name.

David, 47, chose 8am as the time Finn had eaten his breakfast that morning.

Guessing the word emblazoned on the jumper Finn hated, Alesha, 40, who announced she was pregnant on last night’s show, said the slogan was ‘Lucky’.

Amanda, 48, said Finn had caught 52 criminals during his career, while Simon Cowell, 59, guessed the name Squidly.

But some fans felt the trick was a ‘fix’ because police officer Dave asked Simon to shorten the name from Squidly to Squid.

Adding even greater suspense in the studio, Dave then asked the judging panel to choose six letters at random on a board he had set-up.

All of the letters of the alphabet were on pieces of paper that could be flipped over on each row.

After the letters S, R, L were plucked out, Simon was given the task of picking the final three letters.

But as Dave stepped away from the table, some viewers were convinced Dave just flipped over the pieces of paper containing the letters he wanted, which ultimately spelled the word future. 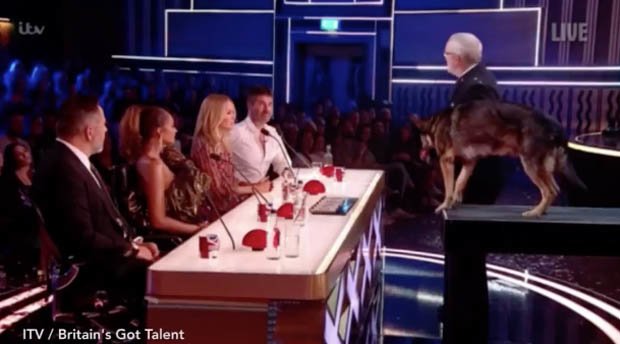 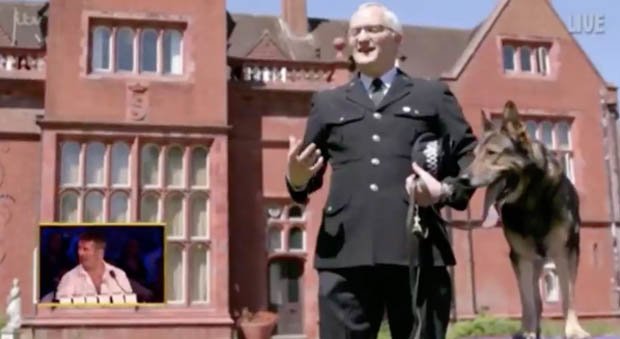 One BGT viewer said: “Makes me sick!! That’s before you begin to consider the eye watering display of incomprehensible magic skills!!….pick a letter, now I’ll ‘randomly’ change them….pick a name, oh, no, not that one, our software can only overlay words up to 5 digits!!”

Another fumed: “That dog act does not deserve to go through, it was a fix throughout!”

Some viewers were delighted to see the duo secure their place in the final however.

One viewer exclaimed: “Well done Dave and Finn. Fantastic act with a fantastic cause.”

While another continued: “Well done to Dave and Finn. Keep it up boys.”

Daily Star Online has contacted a BGT spokeswoman for comment.