True love isn’t flowers and diamonds. As Carrie Underwood showed, while teasing her hubby, sometimes true love is ‘putting up’ with some annoying and gross habits.

“I must really truly love him,” Carrie Underwood captioned the TikTok she posted on Tuesday (Oct. 19), referring to her husband, Mike Fisher. In the video, Carrie, 38, playfully teased her 41-year-old hubby’s home habits to the soundtrack of “If I Didn’t Love You,” her duet with Jason Aldean. Carrie listed off the “things I wouldn’t put up with if I didn’t love him,” and that included “dirty clothes on the floor,” “dead things on the walls,” and “So. Many. Hats!!” Ultimately, Carrie laughed it off, asking her followers – 1.4 million on TikTok – if they could relate.

I must really truly love him… Who can relate?! #IfIDidntLoveYou

♬ If I Didn’t Love You – Jason Aldean & Carrie Underwood

“If men will act like this [when] being marred to THE Carrie Underwood, then they must truly all be the same,” wrote one fan. “Another pointed out that Carried doesn’t have to tolerate it. “Ur literally Carrie Underwood.” Another suggested that she should “leave a Louisville slugger on every pile of clothes he leaves,” a reference to her “Before He Cheats” hit song. “You know, just a little threat of what you’re capable of.” Another said that her house “looks like a Bass Pro Shop,” while one fan said that they knew exactly what Carrie’s dealing with. “My husband is a hunter with a taxidermist father-in-law. I get what you go through. Plus, all three of my kids hunt.”

Carrie and the former NHL player tied the knot in 2010 and welcomed two boys – Isaiah and Jacob – in 2015 and 2019, respectively. Over the summer, Carrie and Mike spent some quality time together out on a boat. This allowed Mike to get in some fishing and for Carrie to catch some sun while wearing a black-and-white bikini. Carrie even got in on the action, modeling some of the fish they caught. “Feeeeeeshies! #CatchAndRelease #JustSayinHi #Outdoors #LakeLife,” she captioned the shot, which also showed off her incredibly toned abs. 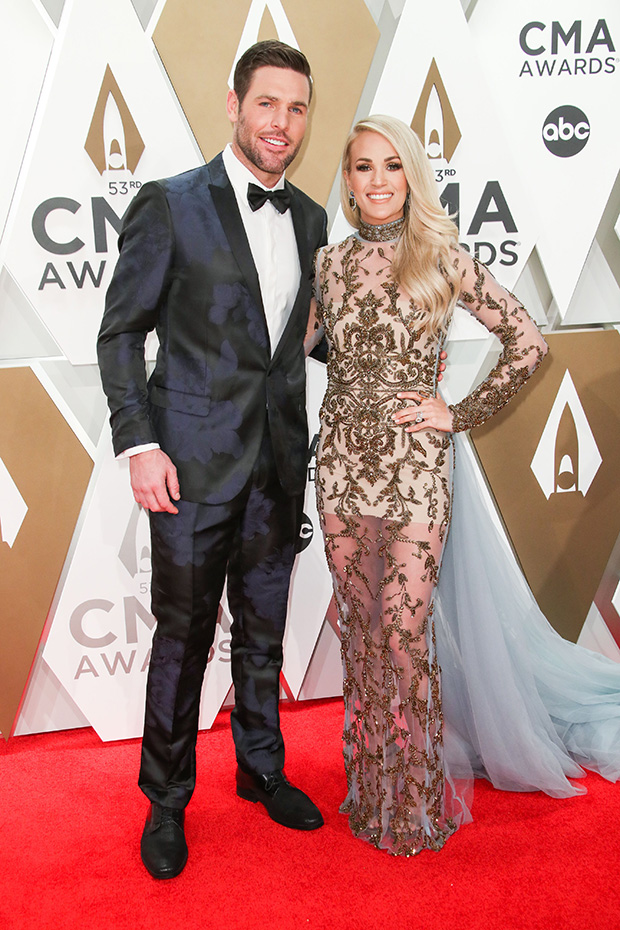 How did Carrie get this figure? She certainly does more than lift Isiah, 6, and Jacob, 2, like weights, similarly to how Mike did in a cute April 2020 Instagram video. “I have to set goals for myself: ‘Every 15 minutes I’m going to hit 1.25 miles, then by the end of an hour I’ll have run 5 miles,’” she said in a March 2020 interview with Women’s Health. “My self-care is my gym time, and that’s a stress reliever for me. Physical fitness makes everything else possible.” Though Mike boasted a serious collection of hunting trophies, Carrie said she was a “wannabe vegan” who still had her cravings.