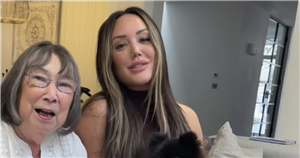 Charlotte Crosby has opened up on her grief since the passing of her Nanna Jean.

The Geordie Shore star announced the news of her loss earlier this week and said she doesn't think her "world will ever be the same" since losing her beloved grandmother.

Today she took to her Instagram Stories to thank fans for their support and messages of condolences.

Charlotte, 32, who recently gave birth to daughter Alba Jean, said: "We've had so many its overwhelming and I must admit very hard for me to even go through them and even open them.

"As I'm still coming to terms with the loss of such a special little woman in my life, the sadness has really consumed me and I cannot lie I am struggling."

The new mum continued: "So I'm so sorry if I haven't replied. I switched off and me and Jake and little Alba have been staying with my mam over the weekend.

"The family all together supporting each other through this time."

Charlotte announced the loss of her 'nana Jean' with a Instragram tribute post and video montage last week.

The reality star told fans that "heartbroken doesn't come close" to how she's feeling and said she "adored every inch" of her late family member.

"I named my daughter after you for a reason nan I don't think you will ever truly know much I loved and adored you and still do," she said in an emotional statement.

She then made a plea to her followers to "hold your loved ones tight because life is truly truly precious."

This sad news comes after the birth of her daughter Alba who she shares with boyfriend Jake Ankers.

Charlotte announced the news of her little one's arrival to her followers last month saying that her bundle of joy had shown her "a whole new meaning to life."

Smitten dad Jake also left a message under her post and wrote: "The most beautiful little Alba, she's more beautiful than we could ever have imagined."

Since then she's kept her followers updated with other sweet snaps of her tot as she continues her motherhood journey.