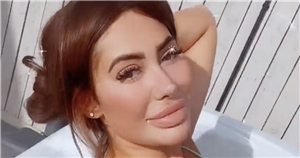 Chloe Ferry has revealed she's ready to have a "hot girl summer" with her pals following her split from Owen Warner.

The 25 year old, who was "paid to share Instagram ads to debt-stricken fans", took to her Instagram stories to post a clip of herself dressed in nothing but a tiny turquoise bikini as she enjoyed a dip in her hot tub.

The brunette beauty looked gorgeous as she styled her mane into bun, allowing two strands to frame her face, while smiling for the camera.

The former Geordie Shore star wore a natural make-up look, complete with fake lashes and some pink blush. She wrote over this: "So relaxing."

Chloe then stood up to show off her toned figure as she told her 3.7 million followers: "My plan this summer.. Hot girl summer with me and the girls."

The TV personality later shared a statement after being inundated with messages questioning whether she is still together with Hollyoaks' Owen.

"Getting a lot of messages asking if me and owen are together just to clarify I am SINGLE we just live very different lifestyles and it's just not the right time at the moment…what will be will be…" she wrote.

Chloe, who recently unveiled her short bob haircut, added: "also I'm very grateful to have had some amazing memories with the boy amazing person inside and out," followed by a pink heart emoji.

The pair's split comes just a week after she told fans on social media that Owen was her boyfriend.

The reality star shared a photo of herself in a tiny yellow bikini as she laid on Owen's topless chest, which she captioned: "Now I no what love feels like," alongside an emoji of an engagement ring.

Chloe even gushed about her new romance as she said: "We met about seven weeks ago and I knew straight away I liked him.

"We had a connection and there was a lot of good banter, I don’t want to put a label on it.

"We get on and we’re really attracted to each other. I’m definitely going to see him when he gets back. Everyone thought it was a joke, because people didn’t expect it – I’m excited to see where it goes," she added to The Sun.

However, trouble soon struck paradise as it was reported the soap actor was messaging glamour model Apollonia Llewellyn just days before going public with Chloe.

Owen and Apollonia were reported to have met when she worked as an extra on Hollyoaks. A source told The Sun: "Owen had his eye on Apollonia as soon as he saw her on the set of Hollyoaks and slid right into her dms.

"He has been desperate to get her to go on a date with him and was trying to pin her down in late April and early May.

"They made plans a few times but the weather and work got in the way. She couldn't make it in the end, which her friends think is lucky considering he went public with Chloe Ferry not long after."

Following her return from the UK, Chloe has deleted the loved-up snaps of herself with Owen from her Instagram page.