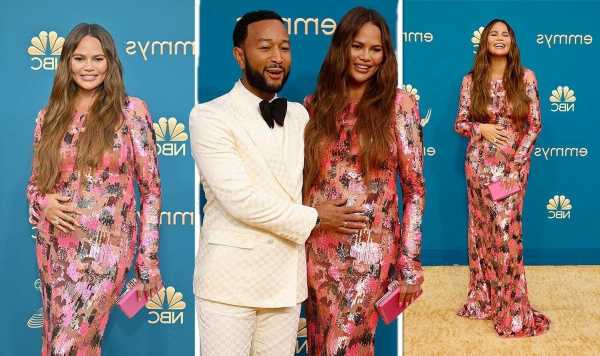 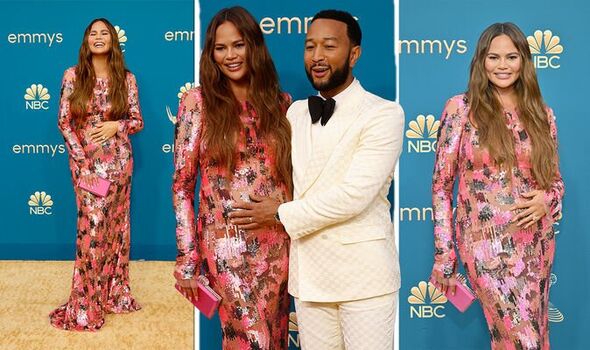 The pair attended the 74th Primetime Emmy Awards on Monday, September 12. Pictured, the American model and television personality Chrissy rested her hand on her bump as she wore a long pink metallic gown which incorporated black, dark pink and purple coloured patches.

The 36-year-old looked proud as she cradled her small bump whilst being photographed on the red carpet of the 2022 Emmy Awards with husband John, 43. The award show took place in Los Angeles on Monday, September 12, the first time it has taken place in-person since 2019.

Positively glowing in her early pregnancy, Chrissy dazzled in a long-sleeve metallic floor-length gown which was littered with different coloured patches.

Tight around her belly the star’s long locks cascaded past her assets while she paired the look with a baby pink coloured clutch and pink nails.

Pictured on the red carpet both separately and together, All Of Me singer John Legend looked dapper in a crisp white Gucci tuxedo. He styled his satin chequered pattern tux with a white button-down shirt and oversized black bowtie.

As the pair couldn’t keep their hands off each other, their delight was a pleasure to see after the couple went through heartbreak during their last pregnancy.

In September 2020, Chrissy suffered a stillbirth with their son Jack but the couple were open and honest about their grief, taking some time to heal before announcing their current pregnancy via Instagram in August of this year. 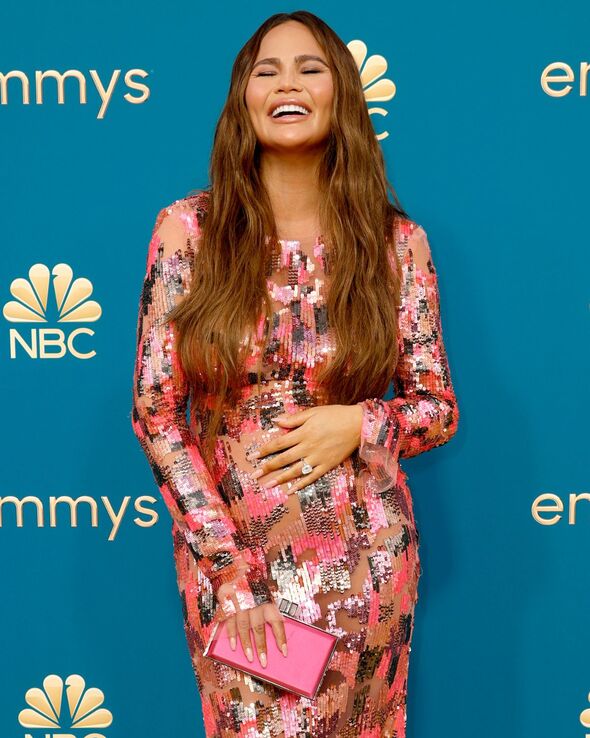 With a relatively glitzy gown, Chrissy paired the look with understated make-up and let her long hair fall naturally down her front. She added a sultry smokey eye and a matte pink lip, matching her baby pink coloured nails and Barbie pink clutch bag, which she held in front of her bump at times. 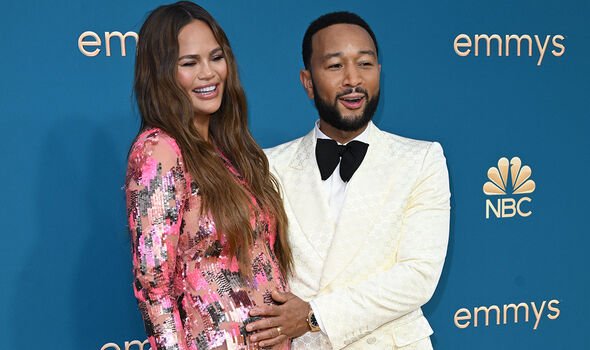 The pride from both Chrissy and John was plain to see as the singer placed his hand on his wife’s baby bump, looking down and gleaming. Later during the ceremony, John performed the new song Pieces for the first time. The song was taken from his new album Legend and was chosen as a backdrop for the ceremony’s In Memoriam segment. 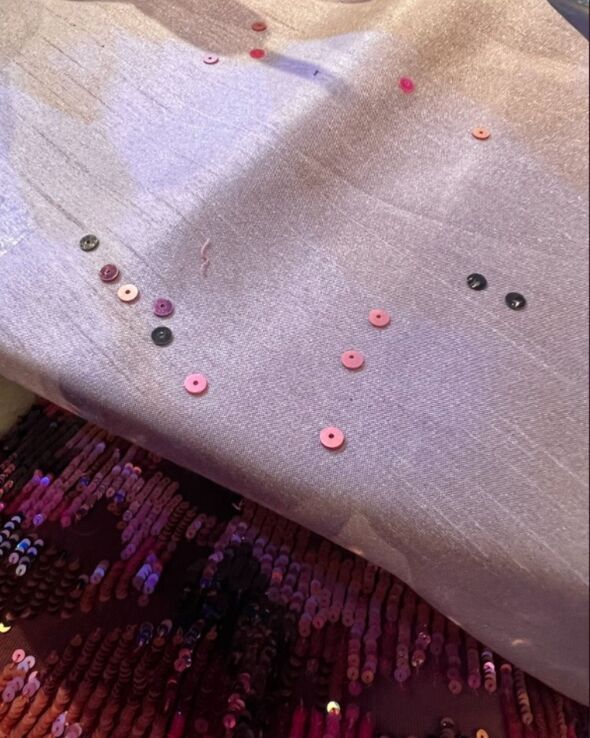 Sequins are a girl’s best friend: Chrissy Teigen left a trail of sequins wherever she went

Chrissy, who has become known for her dry sense of humour, shared two images which summed up her Emmy experience. Posting on her Twitter page, the first image was of both her and John, the second was a picture of scattered sequins that had come off her gown when sitting at their table. User @Wiz02 commented: “I love the idea of leaving a trail of gorgeous shiny beads wherever you walk – fairy tale stuff xx.” 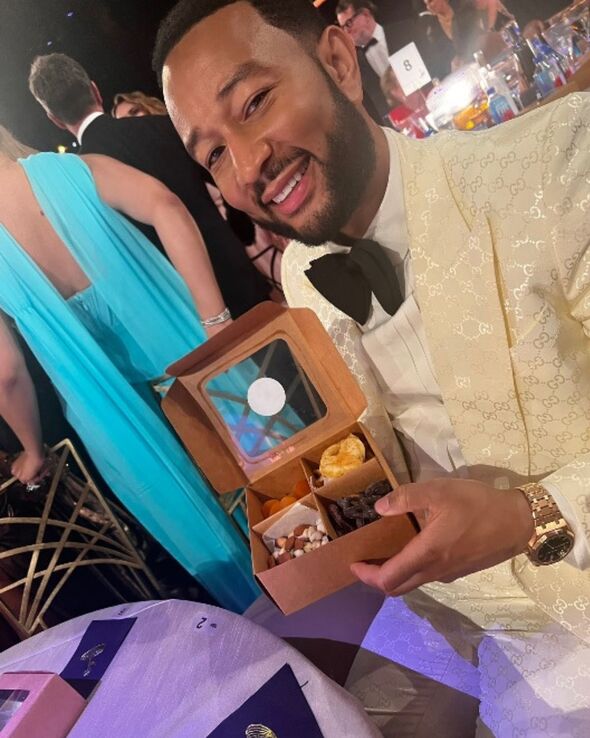 Posting a picture of husband John smiling as he showed the Emmys snack pack, which all guests received to keep them going throughout the award show, Chrissy joked to her 13.2 million Twitter followers, that the snack was not enough to satisfy her pregnancy cravings. She captioned the image, which depicted the small box containing chocolate-covered pretzels, nuts, chips and dried apricots: “Oh I’m gonna need more than this lol.” 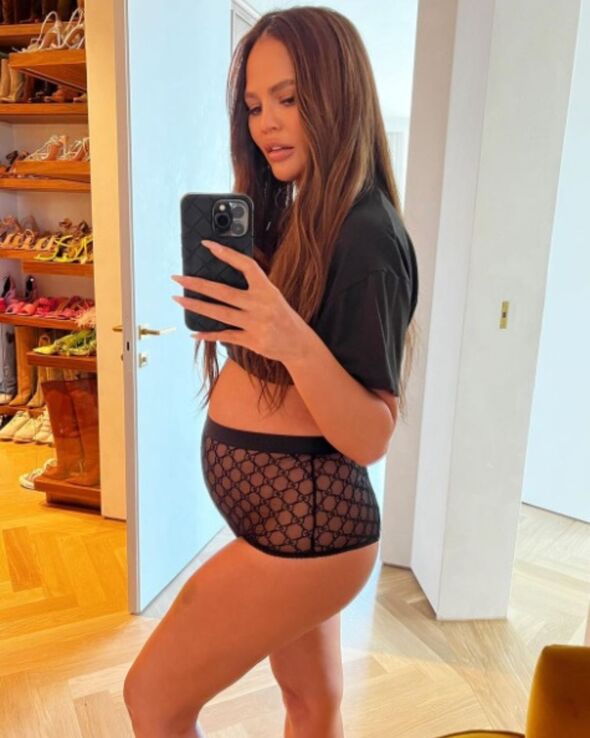 Posting back on August 3 that she and husband John were pregnant with their fourth child, Chrissy spoke about the “blur of emotions” her family have been through. Captioning an image of her posed in front of a mirror wearing a cropped black t-shirt and sheer black Gucci underwear, Chrissy wrote: “Joy has filled our home and hearts again. 1 billion shots later (in the leg lately, as u can see!) we have another on the way.” 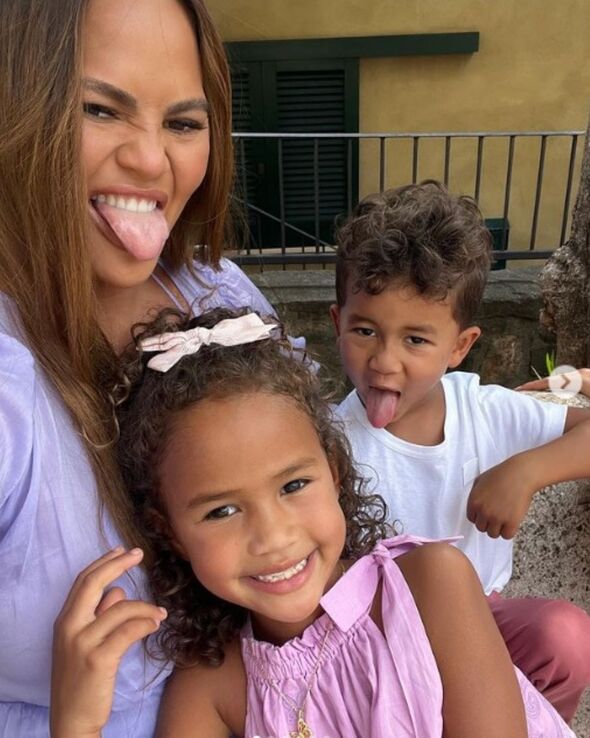 Chrissy is always active on her social media pages and the star often shares images of family life. Chrissy and John, who have children Luna, six, and son Miles, four were seen laughing and smiling whilst on holiday. The model posted a cheeky picture of both her and Miles poking their tongues out at the camera, whilst John look-a-like Luna smiled sweetly.