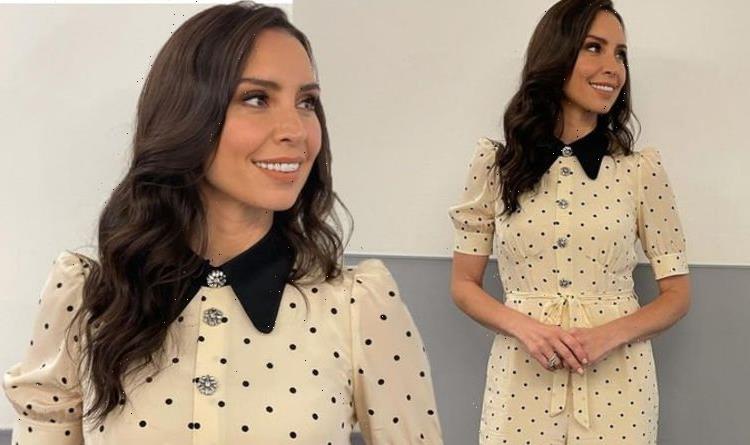 Christine Lampard, 42, has revealed she is struggling with “baby brain” as she filled in for Lorraine Kelly, 61, on her ITV show this morning. The wife of former footballer Frank Lampard has taken to drinking “copious amounts” of coffee to try and combat the side effects from her second pregnancy.

On her Instagram, Christine looked radiant as she wowed in a collared jumpsuit from LK Bennett with diamante button detailing.

She wore her glossy brunette hair in loose waves and paired with smokey eye makeup.

Christine typed: “Happy Monday! Thanks for your company today on @lorraine doing my best to fill @lorrainekellysmith shoes for the next few weeks.

“The baby brain is still very present but copious amounts of coffee helped. Jumpsuit from @lkbennettlondon,” she added.

Fans praised her fashion-forward look as they were glad to see her back on their TV screens.

One said: “Looking great, was nice to see you back on TV.”

A second replied: “Good to see you back.”

While a fourth commented: “Love watching you Christine on Lorraine show and loving the jumpsuit you had on.”

It comes as Christine discussed welcoming her “surprise” son Freddie and her post-baby body in a candid new interview.

The presenter is mum to Freddie, five months, and Patricia, two, who she shares with her husband Frank.

The star admitted it had taken some adjustment welcoming a boy after three girls, including Frank’s daughters from a previous relationship.

She told the Mirror: “It’s brilliant. He’s a very happy little being, so far, thankfully. Freddie settled beautifully into our life.

“He’s very easygoing and just sits there and stares and smiles a lot. Really, that’s it. He’s just brilliant.”

The star ruled out adding to her and Frank’s blended family, saying: “No, I don’t think so. Freddie was a beautiful little surprise.

“To be honest, I think I’m done with surprises. I think we’re very lucky to have the two of them. We’re very content, we really are.”

Reflecting on her post-baby body, Christine said she has embraced the “lumps and bumps” that come with post-pregnancy.

Making her first TV appearance since giving birth on Lorraine, Christine said: “Frank was able to be there but we were very lucky, there were so many women in the early stages who didn’t have that chance, just dreadful.

“He wasn’t able to go to the appointments leading up but he was there for the big day.”

Christine, who is presenting Lorraine for four weeks this summer, said she sometimes felt “isolated” and “lonely” while being pregnant during the pandemic.

She added: “So many people have gone through such horrific times in the past year and being pregnant in that time was unusual, you felt isolated and quite lonely.”