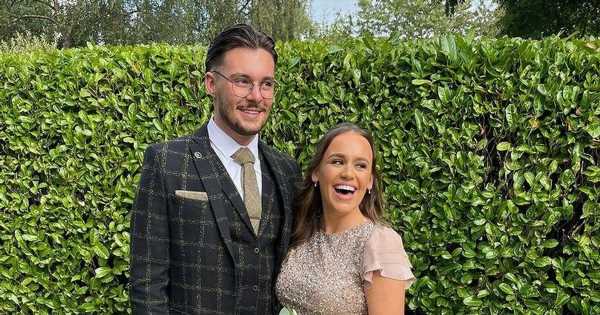 Ellie Leach looked incredible in pictures she shared from her friend’s wedding, which she attended with beau Raegan Pettman.

The Coronation Street star dazzled fans as she posed elegantly in a glittery full-length gown for her friend’s wedding day. The brunette styled the taupe dress with small drop earrings, a beaded hair clip, and a ring on her middle finger.

The 20-year-old’s hair was left naturally styled with a middle parting and effortlessly clipped back from her face.

In one photo, the couple are about to share a steamy exchange as they stand with puckered lips, whilst Ellie clutches a bouquet of flowers.

In the other image, Ellie laughs from something away from the camera with a happy Reagan stood close by her side with a giddy expression.

The ITV soap actress posted the loved up snaps to her 183,000 Instagram followers, as she captioned the adorable images with a simple love heart emoji.

Fans of the Corrie actress were quick to comment on the selection of photos.

One wrote: “You both look fantastic, lovely looking couple”.

Another penned: “Handsome couple” followed by a fire and a love heart emoji.

The couple have been together since 2018 and are known to spend time quality together whilst Ellie isn’t busy playing Faye Windass on Corrie.

Fans weren’t shy to point out how different Ellie looks to her character on Coronation Street in the series of romantic shots.

One fan wrote: “Looking gorgeous Ellie! You look so different from Faye on Corrie.”

Fans usually see the actress on their television screen as Faye with minimal make-up and casual clothing.

Ellie first joined the ITV show back in 2011 as Anna and Eddie Windass’s adopted daughter. It’s safe to say that her character has had numerous dramas along with falling pregnant at the age of 12, keeping the pregnancy a secret from her family, and now spending time behind bars.

The star’s character on Corrie is currently serving time in prison for mistakenly attacking Adam Barlow, thinking it was Ray Crosby in a revengeful plot.