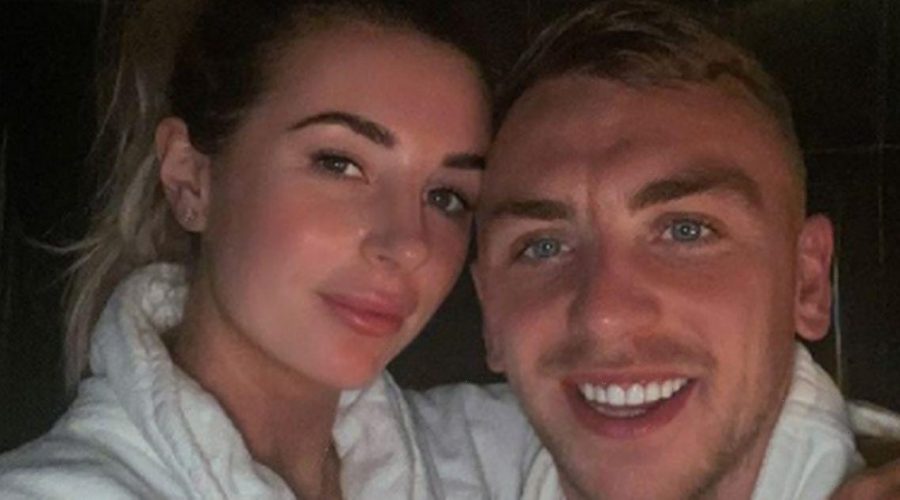 Dani, 25, shared the sweet snap of her cuddling up to boyfriend Jarrod, also 25, to her 3.4 million followers.

The loved-up pair are both wearing white robes and Dani has her arms around a smiling Jarrod.

Jarrod was quick to comment and shared a kissing emoji and red heart to his girlfriend’s post.

One wrote: “U deserve be happy dani” followed by a high five emoji.

While a third wrote: “So happy for you” followed by a red heart emoji.

Up until recently the pair have been fairly quiet about their romance so far, onlygoing Instagram official at the start of December – though they have been linked since October, as exclusively revealed by OK!

Dani confirmed her romance with West Ham footballer Jarrod in November, whom she was pictured strolling down the street with, to The Sun.

The reality star said: "Everything is so early days. Jarrod is a lovely guy, and we're enjoying getting to know each other.

Dani stunning in a polka dot black minidress as she held onto a drink while posing with her trendy other half for the snap that was initially shared by Jarrod on his Instagram story.

Proving she was besotted in her new relationship with Jarrod, Dani was sure to re-share the snap on her own Instagram story.

After they went public with their relationship, Dani went on to post several pictures of their date night in London, before they were later seen strolling through London together.

“Everything is so early days. Jarrod is a lovely guy, and we’re enjoying getting to know each other,” she said in October.

“But Santi will always be my main priority, he will always come first. I am concentrating on being a mum and, beyond that, whatever happens, happens.”

Dani's famous father, Danny Dyer has also given her his blessing for this relationship, as her actor-dad is a life-long West Ham fan, the team which Jarrod plays for.

Rumours began to circulate that the couple was growing close in recent months after Dani split from her boyfriend, Sammy Kimmence, earlier this year.