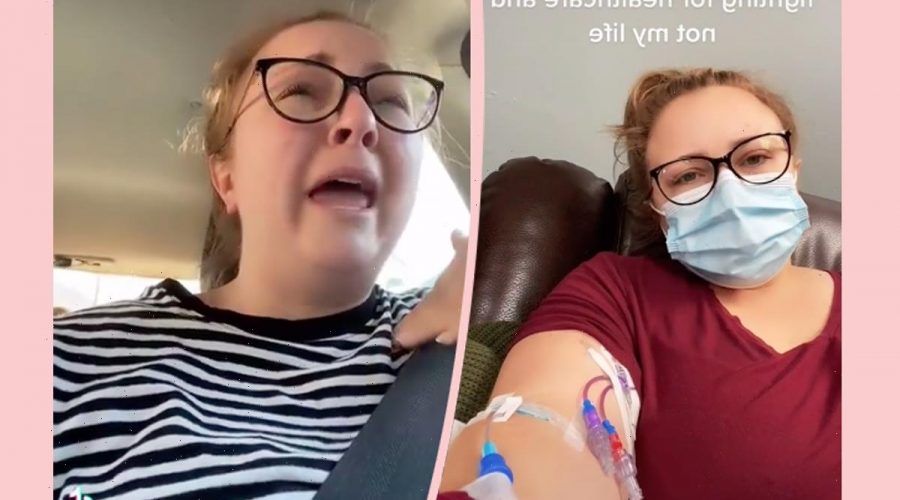 Well, this is infuriating and heartbreaking all at once.

Back in February a woman named Amanda Lee shared a terrible experience she’d just had at the doctor to TikTok.

For months the Los Angeles-based actress/singer was experiencing severe stomach pain and gastrointestinal distress. She went to doctor after doctor but kept getting ignored. In the meantime eating was so painful for her, she lost about 35 lbs.

Finally she was able to get an appointment with a specialist, a gastroenterologist. But her experience with him was even worse. She says tearfully in the video, just moments afterward in her car:

“I told him that I haven’t been eating because it causes pain when I eat. And he looked at me and had the audacity to say, ‘Maybe that’s not such a bad thing.’”

She later told Today that he told her the fact she was only able to eat things like apple purée was a “blessing” — adding that she “doesn’t look malnourished.”

That’s right. He body shamed her. A lot.

She told him about a pain so bad it was stopping her from one of the very basic life functions we need to survive, and his thoughts were immediately about her weight. NOT about her health.

That TikTok went viral as people shared similar experiences; it has now been viewed over half a million times. Unfortunately it’s all too common for doctors to dismiss any and all health concerns as having to do with weight. But in this case the guy didn’t even blame the weight — or address her concern at all.

To her credit, gurl went back in and demanded an apology, to which the doctor said he couldn’t be her doctor because she “didn’t get” his humor. Ugh.

Despite the horrible experience, the encouragement from new followers online led her to go to yet another doctor. After all, whether that jerk doctor thought so or not, her symptoms were really serious.

She eventually got a colonoscopy, which showed a large tumor, which she had to get removed. After the surgery, doctors had a new diagnosis for her. Colon cancer. Stage 3A. It had already spread to her lymph nodes.

Amanda, who just turned 28 in May, is now undergoing chemotherapy. She’s still sharing her journey on social media. She was even part of a Today show report last week on how women are treated by medical professionals.

She’s turned the awful experience into an opportunity to help others who have experienced this — of which there are MILLIONS.

Just this week she made a video about how to advocate for yourself when you go to the doctor:

If you know something is wrong with your body, if you are in pain, and your doctor dismisses it because of your weight, tells you you’re just “getting older,” or suggests it’s probably just in your head? Do NOT accept it. Do NOT allow yourself to be bullied. And do NOT quit.

But seriously, to all these doctors telling people stuff like this? Who don’t care and don’t provide care, who are just there to collect a check? This is NOT the job for you. This is a job where lives are at stake. If this is your level of care, you need to lose your medical license and start working in a Taco Bell drive-thru. Shame on you.

And to Amanda? Gurl, you keep doing you, because you are AH-Mazing!