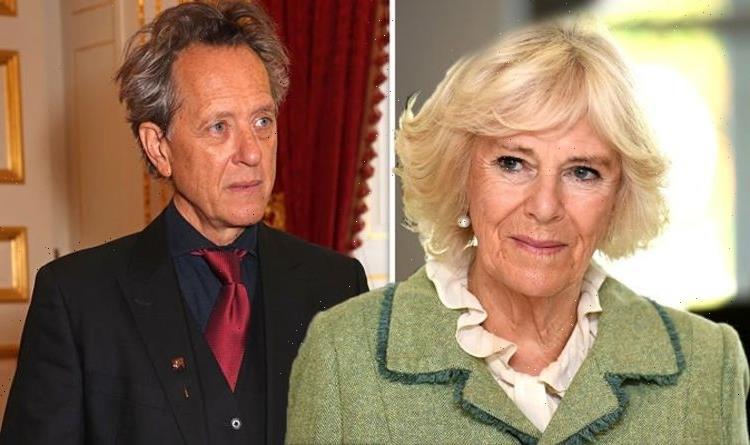 Richard E Grant revealed that his wife Joan Washington had died at the age of 74 following a long battle with lung cancer. The Duchess of Cornwall is now said to have been “very supportive” of the actor when they met at Clarence House yesterday.

The Withnail and I star was comforted by Camilla at a reception she was holding to thank those who supported her Reading Room initiative.

The Duchess is said to have put her arm around Richard before telling him that his late wife would be “looking down” on him.

After the event, Richard said: “The Duchess knew my wife very well, who died last month.

“She was talking about her. She was very supportive.”

According to Hello!, he also praised her Reading Room initiative: “I grew up in a country where there was no television service, so I have been an avid reader since I was four years old.

“Lockdown I think encouraged or allowed people to read much more than in normal circumstances.

“Reading has been the gateway of everything I have known or liked in life.

“And it’s cheaper than anything.”

Last month the star described how Prince Charles had visited he and Joan before she died.

He wrote in the Daily Mail: “Prince Charles came to see ‘The Colonel’ [a nickname for his wife] last month, sat beside her, took her hand and said, ‘It’s been an absolute honour to have known you, Joan’ to which she instantly quipped, ‘I’m STILL here.’

“Which broke the ice and made all three of us cackle.

“Astonishingly, unlike me, she’s never been star struck and possessed the innate gift of speaking to everyone of any age or status as her equal.”

The actor announced that Joan had died on September 3, eight months after receiving her stage-four lung cancer diagnosis.

Along with his statement, Grant shared a sweet video of the pair dancing to the song Only You.

He wrote: “ONLY YOU! Joan – Love of my Life & Giver of Life to our daughter Olivia.

“Our hearts are broken with the loss of your Life last night.

“To be truly known and seen by you, is your immeasurable gift.

“Do not forget us, sweet Monkee-mine.”