One of the biggest stars in the NFL is Ezekiel Elliott of the Dallas Cowboys. One of the biggest stars in the entire world, though, is Taylor Swift. While Elliott has only been a popular sports figure since 2014 when he was dominating at Ohio State, Swift has been a superstar for well over a decade. Her status as a massive celebrity, though, didn’t keep Elliott from shooting his shot back when he was still just a rising star.

Ezekiel Elliott was becoming a star at Ohio State

Ezekiel Eliott didn’t get much playing time as a freshman in 2013 at Ohio State, but in 2014, he proved to be one of the country’s best running backs.

Elliott wasn’t done, though. In the national championship game against Oregon, Elliott ran for 246 yards and four touchdowns to lead OSU to the national title.

Elliott’s performances certainly made him a big-time star, and he was the big man on campus when he returned to OSU in 2015. The Buckeyes didn’t win the championship in 2015, but Elliott still had a remarkable year as he ran for 1,821 yards and 23 touchdowns.

However, he didn’t have success in all areas of his life during that time.

He failed miserably when asking Taylor Swift out on a date

In 2015, Taylor Swift was in Columbus, Ohio for a couple of concerts. Elliott knew it, too, as he reached out to ask her on a date.

He didn’t just do it once, though. He reached out multiple times.

“[Taylor Swift] I see [you’re] in town tonight want to grab something to eat after the concert?”

A little less than an hour later, Elliott tweeted Swift again, asking if she wanted to meet him at Hyde Park.

Under further review, Hyde Park is a steakhouse in Columbus. According to Yelp, though, it is only four stars. Taylor probably deserves five stars, right?

Well, Elliott certainly wasn’t done shooting his shot. At 1:31 p.m. on that same day, he tweeted: “[Urban Meyer] should invite [Taylor Swift] to team dinner at the golf course tomorrow night. There’s always a seat open next to me.”

Someone has to catch a hint eventually, right? Wrong.

Elliott, who wore No. 15 during his college career, then tweeted later that evening that he planned to wear Swift’s lucky number 13 that weekend. He didn’t actually wear it, though, as Stephen Collier and Eli Apple both already wore 13 that season. He did, however, have a nice game that weekend in a win over Northern Illinois, as he ran for 108 yards.

So, did Swift ever get back to Elliott? According to The Dallas Morning News, Elliott said she never did. It certainly wasn’t for lack of trying, though. Maybe, he tried too hard?

Taylor Swift and Ezekiel Elliott could have been a power couple 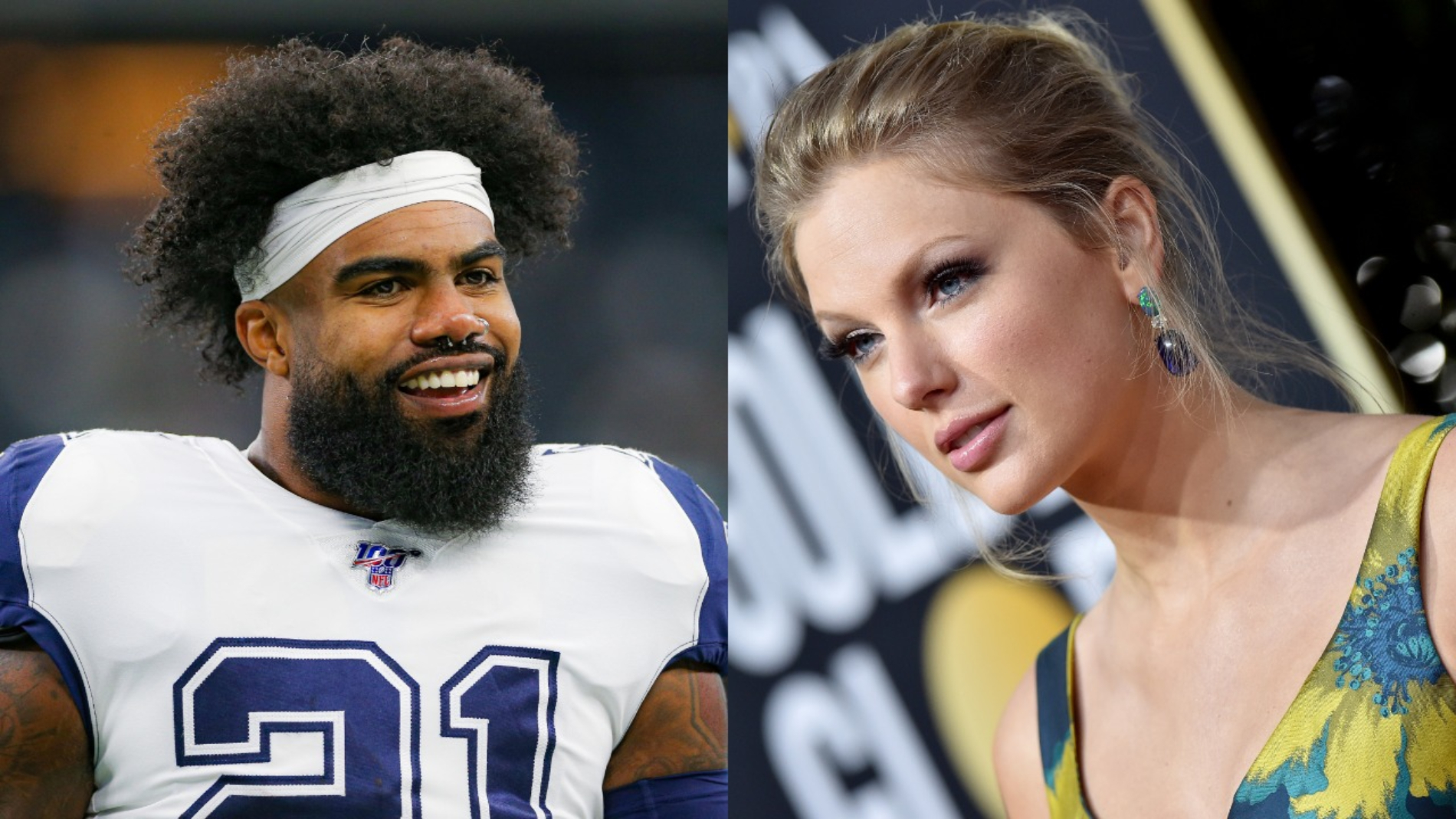 Elliott was just a college kid at the time, but, in hindsight, he and Swift could have been a power couple.

He went to the most popular franchise in the NFL in the Dallas Cowboys with the No. 4 overall pick in the 2016 NFL draft. Elliott then led the NFL in rushing yards in two of his first three seasons in the league, and he led the league in rushing yards per game in each of his first three seasons. This led to him later signing a six-year, $90 million contract with the Cowboys, per Spotrac. Forbes also estimated that he would make $23.3 million in 2020.

While that’s certainly a lot of money, that’s nothing compared to what T-Swift makes. Celebrity Net Worth estimates that she is worth $400 million.

Ezekiel Elliott and Taylor Swift could have certainly been a power couple together. It appears, though, that Swift was just not really that interested.