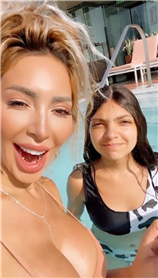 No one really knows what Farrah Abraham does to pay the bills these days.

Sure, she has a large social media following, which means she can cash in on sponsored content deals, but the Teen Mom money is probably long gone, and Farrah’s many business ventures have all fallen flat.

And yet somehow, Ms. Abraham is able to travel the world non-stop, often with her daughter Sophia in tow.

Oh, and of course, there are always funds available when Farrah “needs” plastic surgery.

This week, Farrah’s fondness for travel and her love of cosmetic procedures converged in a series of Instagram posts that are not for the faint of heart.

It was the usual display of vanity and egotism from Farrah — but on the bright side, at least she brought her kid along?

Farrah rocked a bikini that’s tiny even by her standards, and she seized the opportunity to remind her followers of just how much work she’s had done.

For example, you probably knew that Farrah got breast implants, but did you know she had her butt surgically plumped up, as well?

Yeah, you probably did.

After all, it’s not like Farrah is shy about her procedures.

In fact, much of Abraham’s recent memoir — the bafflingly titled Dream Twenties — is devoted to discussion of the many, many times she’s gone under the knife.

“Yes, it’s true, I got plastic surgery and with that responsibility and freedom, there is a lot I learned,” Farrah wrote in her typical word salad style.

“I am grateful I got to show or document pretty much my first to my last procedure publicly. That includes even the mess-ups.”

Farrah has had multiple breast augmentations, and she says she’s finally happy with the results, but not all of her changes went so smoothly.

Take, for example, the surgery she didn’t even know she was getting until it was too late:

“There will be those insecure times with plastic surgery, where it’s not like the amazing boob job that just changes your world where life is going to stay sunny and pour money all over you, no I’m talking about when I got a chin implant,” Abraham wrote.

Farrah says the chin implant came as a surprise, as she went in for a nose job. and woke up looking like Jay Leno.

We kid both Farrah and Jay!

Obviously, the more cosmetic procedures a person undergoes, the more likely it is that one of those procedures will be horribly botched.

(Anyone remember the debacle with Farrah’s lips?)

And in Farrah’s case, the situation is even more risky, as she tends to seek out surgeons who will perform the procedures very cheaply — and even for free in some cases!

Yes, Farrah has boasted in the past about getting free implants in exchange for giving her surgeons a shout-out on social media.

So maybe she’s not as well-off as she’d like us to believe she is.

And Farrah should really be careful with exchanging surgeries for spon-con.

After all, there will come a time when she’s had so much work done that no self-respecting surgeon will want to be associated with her.