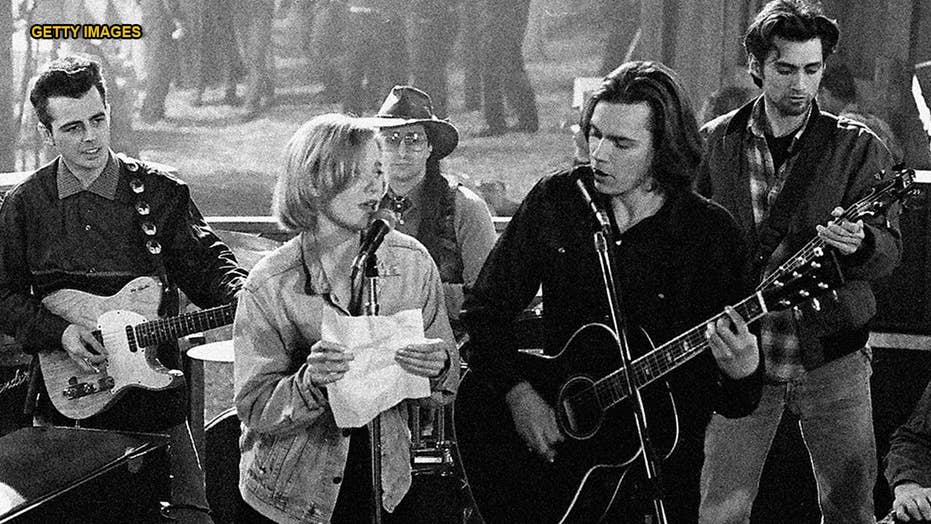 Samantha Mathis opened up about the day her then-boyfriend River Phoenix died at a Hollywood nightclub nearly 25 years ago.

A former Children of God member doesn’t believe River Phoenix’s childhood with the apocalyptic sex cult was solely to blame for his death at age 23.

Flor Edwards escaped the same doomsday group that Hollywood celebrities like Rose McGowan and brothers Joaquin and River Phoenix were raised in.

“I think growing up in such a sheltered and psychologically confusing environment can lead to vulnerabilities and instabilities not experienced by most people, and the temptation to succumb to damaging tendencies such as drugs, alcohol, sex and suicide can be greater, but I can’t say for sure if it may have led to his death,” Edwards — who has never met the Phoenixes or McGowan – told Fox News. “There are many more complex factors involved, I’m sure.” 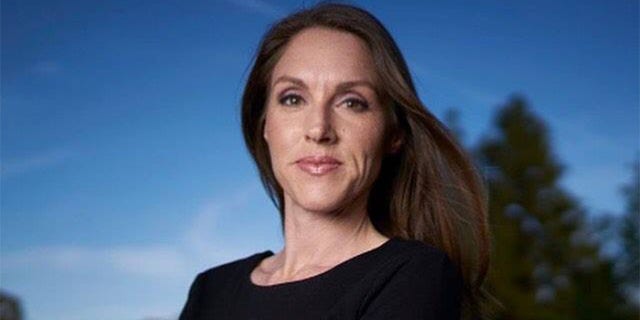 Former Children of God member Flor Edwards penned a memoir about her turbulent childhood titled “Apocalypse Child: A Life in End Times.”
(Courtesy of the author.)

The Children of God and its history is the subject of a new docu-series titled “People Magazine Investigates: Cults,” which airs on Investigation Discovery (ID) on June 3. The show, which is kicking off its second season, explores how ordinary people “who, lured by promises of eternal life, get caught up in a terrifying web of abuse, deception and manipulation.” It features reporters who’ve covered these harrowing cases, as well as former members.

Past subjects have included the Jonestown Massacre, Nation of Yahweh and the Tony Alamo Ministries, among others.

On Wednesday, People magazine reported Phoenix’s friend Joshua Greenbaum revealed that he had wondered if the actor’s involvement in Children of God might have played a part in his shocking demise.

“It was not a healthy situation,” Greenbaum told the outlet. “You can’t go through that trauma at such a young age and not be affected by it for the rest of your life.”

Phoenix, who rose to fame with the 1986 film “Stand By Me,” collapsed in front of The Viper Room in West Hollywood, a nightclub then owned by fellow actor Johnny Depp. Phoenix died there of a drug overdose on Oct. 31, 1993. He was 23. 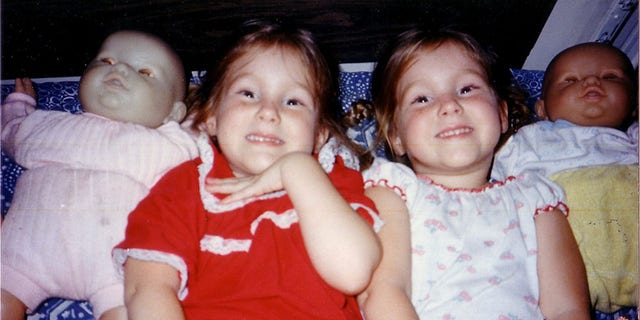 Flor Edwards and her sister.
(Courtesy of the author.)

“Even though River Phoenix’s death was by overdose, having grown up in the same cult he was born into, the Children of God, I talk about my own attempt at suicide in my book,” Edwards, who penned a 2018 memoir about her turbulent childhood titled “Apocalypse Child: A Life in End Times," explained.

“While it’s hard to ignore the fact that a childhood within the Children of God was indeed damaging for some, it would be a stretch to say that the few years River Phoenix spent in the Children of God may have led to his death," she continued. "It would be a causal fallacy with not enough information to infer that a few formative years were damaging enough to cause a drug overdose as a young adult.

“There are many factors here at play, including psychological, genetic, social, etc.,” Edwards stated. “Was it the Children of God that caused his death, or the Hollywood industry that led to his demise? I don’t think one can draw a conclusion based on either. And what about the many young artists who die by overdose or suicide who did not grow up in a cult? 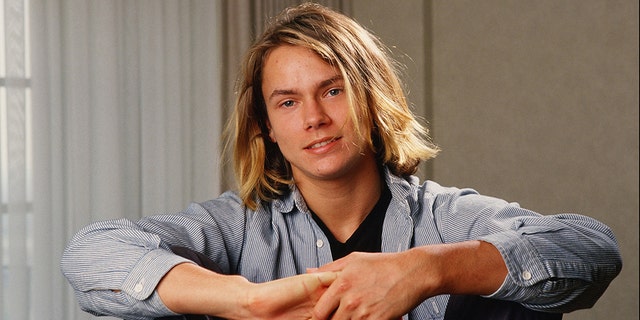 Actor River Phoenix, star of "Stand By Me," playfully poses during a 1988 Los Angeles portrait session. Phoenix, a rising young film star, tragically died in 1993 outside a Sunset Strip nightclub of a drug overdose.
(Getty)

According to The Guardian, the Children of God started in 1968 by a small group of runaway teens and hippies who, under the orders of self-described prophet David Berg, dedicated their lives to worshipping Jesus Christ and engaging in promiscuous sex.

Phoenix’s parents joined the Children of God when he was 3 years old. They remained in the group for about six years in the ‘70s. 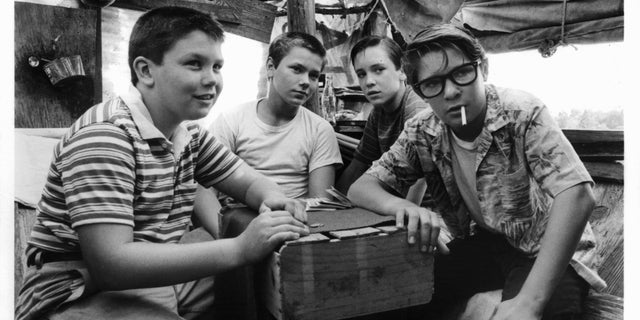 River Phoenix seen here second from left with the cast of "Stand By Me."
(Getty Images)

“They wanted to make a good life for their kids that wasn’t the typical ‘white picket fence’ kind of life,” Greenbaum shared in the show, per People. “Obviously, they were searching for something.”

According to the outlet, the Phoenix family often busked on the streets to raise money for the cult. They traveled frequently until they landed in California. It was there where the family launched entertainment careers for all five children: River, Joaquin, Rain, Summer and Liberty.

After Phoenix found fame in “Stand By Me,” he co-starred in “Running on Empty” two years later, which resulted in his first and only Oscar nomination.

Phoenix rarely spoke about his time in the Children of God. However, he did tell Details Magazine in 1991 that he was allegedly 4 years old when he first had sex while in the group.

“I’ve blocked it out,” said Phoenix at the time. 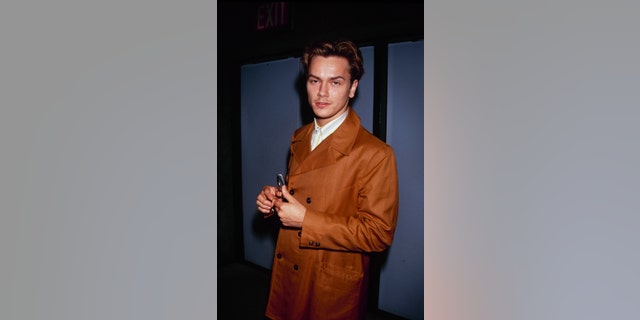 Back in October 2018, Samantha Mathis opened up about the day her then-boyfriend passed away to The Guardian.

The now-49-year-old told the UK-based publication she believed they were just dropping off Phoenix’s brother and sister at The Viper Room. However, Phoenix told her he was asked to stay.

“When we arrived he said to me: ‘Oh, there are some people playing music tonight in the club who want me to play with them — that’s OK, right?’” Mathis recalled.

The “American Psycho” star said she felt “something was wrong that night.”

“I knew something was wrong that night, something I didn’t understand. I didn’t see anyone doing drugs but he was high in a way that made me feel uncomfortable — I was in way over my head,” she said.

“Forty-five minutes later, he was dead," she added.

Mathis said she had not spoken in detail about what occurred the night of Phoenix’s death because she was traumatized and wanted to respect his family. But she said she felt more comfortable talking about the late actor after she recently watched the 1993 film they starred in together, “The Thing Called Love.”

On the night of his death, Mathis said she was aware Phoenix was high.

“I knew he was high that night, but the heroin that killed him didn’t happen until he was in the Viper Room. I have my suspicions about what was going on, but I didn’t see anything,” she said.

A few moments later she saw the actor being pushed out of the club by a bouncer, then “drop to the ground and go into convulsions on the pavement.”

“What have you done? What are you on?” Mathis recalled shouting at a man. 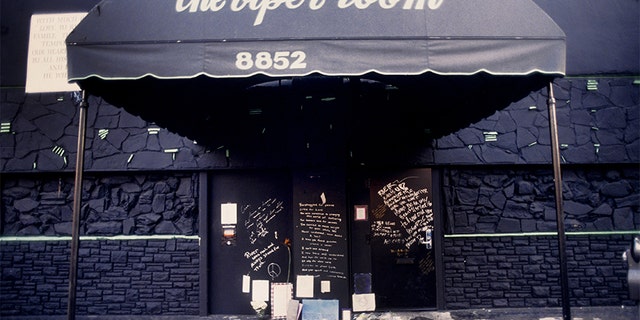 The Viper Room the day after the death of actor River Phoenix. Fans have left flowers, candles and notes at the spot where he collapsed on November 1, 1993 in Los Angeles, California. (Photo by Michael Ochs Archives/Getty Images)

The “Little Women” star said she ran inside the club to find Phoenix’s siblings. Phoenix’s brother, Joaquin, called 911. The star was pronounced dead at the hospital from an overdose of cocaine and heroin.

Mattis said she and Phoenix met when they were teenagers and remembers him as being “sensitive and obsessive.”

“We met when we were both 19, and he bummed a cigarette off me in an LA club. This sounds incredibly cheesy but I knew I would be with him one day. It just felt fated between us, and there was such chemistry,” Mathis said.

She said she thinks if Phoenix were still alive, he would still be in the entertainment industry.

“I’m looking at a photo of him now, oh, wow …” she said. “I think if River was still here, I think he’d be acting, directing, saving the environment, just living and hanging out. Oh, gosh, wouldn’t that be nice?”