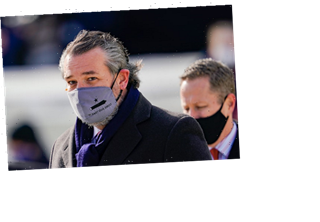 “Fox & Friends” showed Ted Cruz handing out supplies to struggling Texans over the weekend while glossing over the fact that he had left the state mid-crisis for a trip to Mexico. The Fox News morning show then shifted focus to how Cruz’s original travel plans — which revealed he planned to return Saturday instead of Thursday — became public knowledge.

Mele continued, “This as United Airlines is investigating who leaked the senator’s flight information revealing when he was supposed to originally return to Texas after the controversial trip to Cancun,

She did not elaborate on what the controversy was, moving onto the next headline.

Of course, Cruz’s jaunt to Cancun was widely covered last week, when he was spotted flying out of Texas to warmer weather while millions of his constituents went without power and heat for days amid a snowstorm. Dozens of people died. After cutting his trip short on Thursday, Cruz defended his decision on Sean Hannity’s primetime show, explaining that his children had wanted to go and he was chaperoning them.

“Fox & Friends” instead chose to turn their eye to the United Airlines investigation on how Cruz’s travel plans leaked.

Their coverage was in sharp contrast to MSNBC’s, where the hosts of “Morning Joe” lambasted Cruz. Co-host Mika Brzezinski said Cruz was in “damage control mode” and was in disbelief when the senator tweeted out photos of himself loading water into cars with the hashtag #TexasStrong.

“Are you kidding me?” Brzezinski asked incredulously.

Watch the “Fox & Friends” segment above.