Welcome to Metro.co.uk’s The Big Questions, where we ask the big questions (and the smaller ones too).

Today we’re getting into it with Fred Sirieix.

The First Dates maître d’, 50, may have moved to the UK more than two decades ago, but his love of what the French call Le Goûter still thrives.

This is what his countrymen call a snack with a loved one (honestly, they just do life better, don’t they?), so it was a no-brainer for the TV star to helm a new campaign to bring a little Le Goûter to Blighty.

Because we do love a biscuit, don’t we?

‘In English, you would maybe say afternoon tea, but it’s more informal than the afternoon tea,’ Fred says, as he explains the concept to Metro.co.uk one morning, and as we eye a stack of biccies out of the corner of our eye.

He adds of the beauty of Le Goûter for his partnership with Lu: ‘Why wouldn’t you actually take your time to give yourself this pleasure, this relaxing moment? You know, it’s important, but we don’t think about it because we’re always rushing – and we’re missing out.’

You know, it might just be why so many of us envy the French way of life.

As well as the way of our neighbours across the Channel, we dive deep with Fred about philosophy, fame and what he gets up to with Gino D’Acampo and Gordon Ramsay on the road for their series.

Look, the Brits make very good biscuits. Lu are the biscuits that I was brought up with, from the age of two years old. It’s not nostalgia, because I don’t really like the word nostalgia, it’s just knowing what you like.

So there’s a good reason you’ve teamed up with them for this campaign then.

My mum used to buy them [and] me and my brother, when we were coming back from school, it was a time of what’s called Le Goûter, which is a French tradition. So basically, you get your biscuits, you go to the table with mum and dad or whoever’s there, and you have a bowl of hot chocolate, and you dunk your biscuits in the hot chocolate… and then after, you start your homework. That’s what you do when you’re a kid in France. 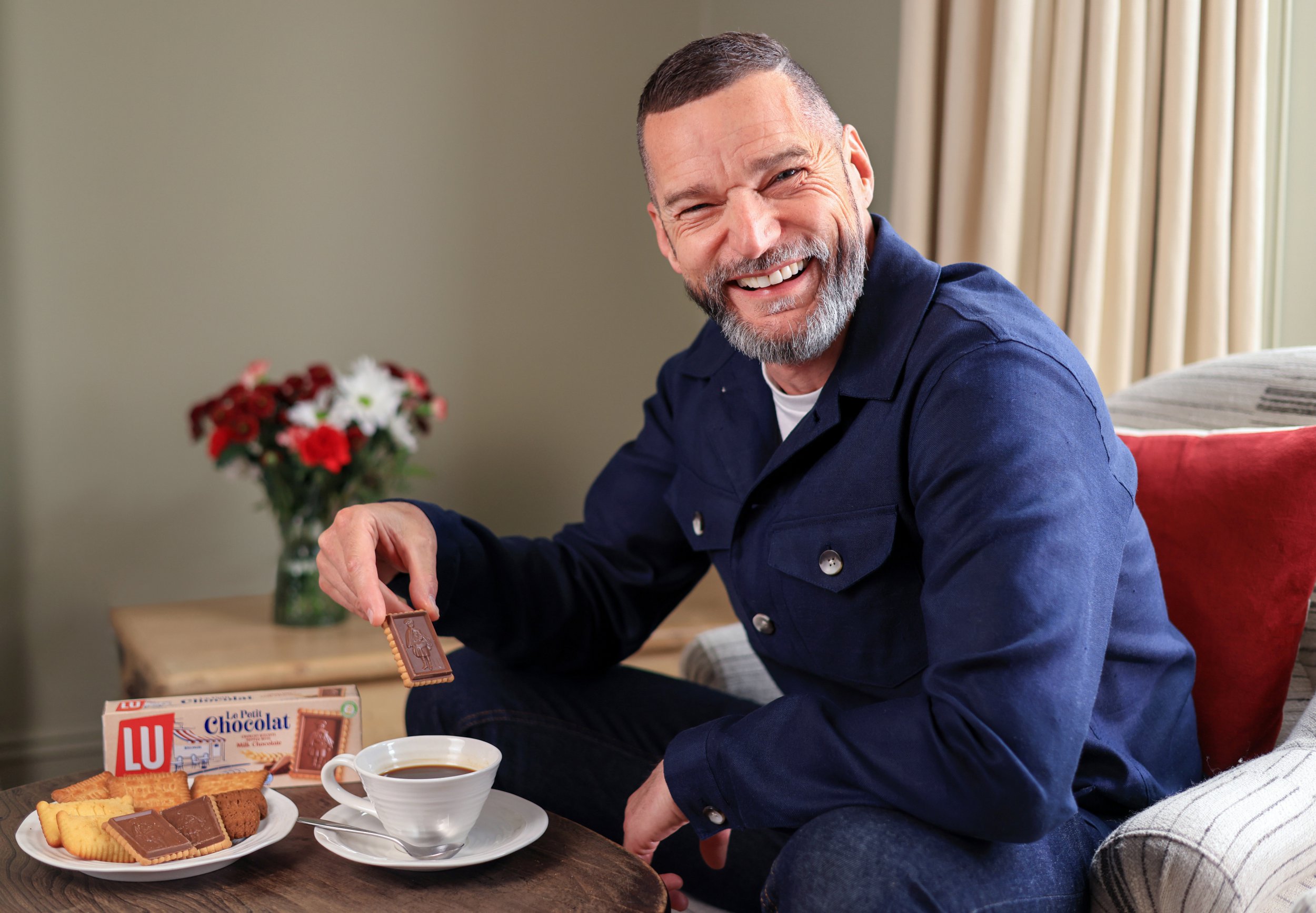 On Saturday afternoon, if it’s raining or whatever, you’re in front of the TV and you eat your biscuits and you feel so good. So to partner with Lu, for me, it’s just like partnering with my childhood biscuits.

I recommend dunking two by two, because they are so good.

There is a real obsession with the French way of life. What is it you do so well?

I think they love these ideas of the French having the long lunch break, between 12 and two o’clock and then at five o’clock the shops are closed. I mean, it’s not like that anymore, really. But it is still more like this in France than it is anywhere else I’ve visited. And the French like their holidays and they like their free time.

What I love when I go to France are the conversations that I have with people about philosophy and about the meaning of life, and the history. I love that passion.

At the same time, sometimes they get on my nerves because sometimes I expect more from my fellow countrymen and they disappoint me and I just, I’m the worst critic of the French, right? But I can’t help but love them.

And France is so romantic. You know, I’m always arguing with Gino about who can sing the most romantic songs, and obviously, he thinks it’s the Italian, but I think it’s the French.

Alongside Gino and Gordon, as well as through First Dates, you’ve become such an icon of TV. What are your thoughts on being famous?

I don’t really think about it. The only time I really am conscious of it is at the supermarket, or you’re walking in the street, and people come and they want to take a selfie. Of course, you’re on television, so people see you and that’s what happens. But otherwise, you know, in my life, [today] I’m wearing my T-shirt, shorts, I’m pretty relaxed.

It’s true that when you are on television, people recognise you and if they like you, you know hopefully they do, they want to have a picture because when they see you in the street, they see a long-lost friend they haven’t seen for a long time and you make them laugh or you make them cry or they agree with you or they just like you. That’s what it is, you know, and that’s what fame is really on a day-to-day, you’re doing everything like everybody else, you know?

Are there misconceptions about you, or things you read that are so far from the truth?

All the time. But I don’t make a point of saying it, because otherwise I’m adding fuel to the fire. It happens all the time. I like professionals, and I don’t like lazy journalism, people lifting things up from me, but at the end of the day, this is what happens in the world everywhere. But it’s interesting when you realise it’s happening to you and you think ‘oh my god, but this is not true’. C’est la vie.

If it was a very serious matter, where it’s of vital importance to say something, I would, but I just stay silent. I’m private. I can talk, I can say what I want, but I’m private. But they can say whatever they want.

We’ve seen the love fans have with your First Dates comrade Merlin, amid his cancer treatment. How have you all rallied around him?

Merlin is a great guy. We’ve been doing this show for almost 10 years, so we’re very close, you know. When he first told me about it, it was a shock. But Merlin being Merlin is very philosophical.

I think it was lucky also it was taken in time, so it wasn’t as advanced as it could be. It’s very scary, as you can imagine. Life has a funny way to remind you of how small you are and of humbling you very, very quickly.

Today I got up, and the first thing I can hear is the birds singing. You open the curtains and the sky is blue. Wow, what a day. It’s Monday morning, I feel so grateful and lucky, and long may it continue.

Speaking of friendships, you and Gino look thick as thieves. What are you guys cooking up for us at the moment?

We are just talking about where we might want to go. I was telling him that I’d love to go to India. I’ve never been to India. It’s the country of colour and contrast, isn’t it? I’ve always wanted also to go to Kathmandu. I mean the whole part of India, of course, but Kathmandu and also Southeast Asia, South America. But all will be revealed in good time…

I’m amazed that you still want to go travelling with him after watching your series Gordon, Gino and Fred…

We were out of control. And it’s just nice to be free, to feel like you’re flying. You know what I mean?

It’s great for us to watch. But from your hilarious stories on ancient genitals to dancing around Gordon in the nude, if that’s what makes it to TV, what don’t we see on your trips?

Look, we have a lot of fun, that’s for sure. And that’s why it’s great to do it. And I think that’s what shows on camera, because we have genuine fun.

Even if Gordon is just going crazy because we’re having too much fun, that in itself is funny, because you’re like, ‘why are you such a killjoy? Just enjoy life for God’s sake’. Everybody’s different. It’s about live and let live. You’ve got to enjoy people for who they are, no matter what they are, you know?