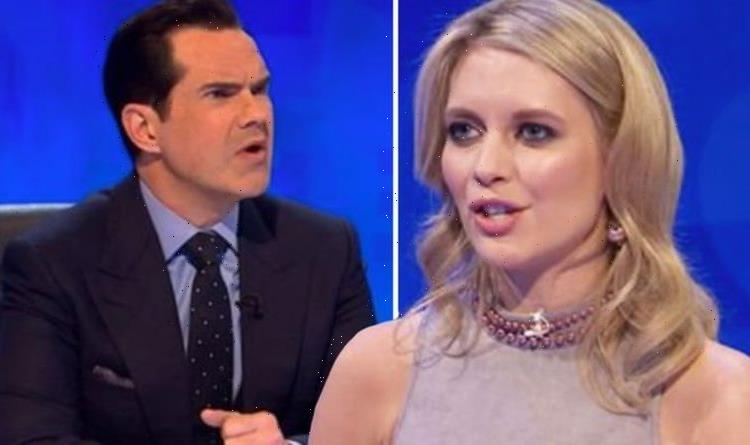 Rachel Riley, 35, was horrified by her 8 Out of 10 Cats Does Countdown co-star Jimmy Carr’s latest stand-up gig for Netflix, which left her in fits of giggles. The maths whizz was taken aback as she warned her followers that if they watched his new comedy show His Dark Material, on the streaming site, that they’d be in for more than the off-the-cuff jokes they are used to on the late night Countdown spin-off.

Taking to Twitter to share a clip of one of the darker parts of his routine, the mum-of-two exclaimed: “OMG he’s got worse.

“This special makes the Cats Countdown version of Jimmy look like a Songs of Praise presenter.”

Famed for his award-winning stand-up and TV presenting roles, the comedian’s latest gig finds humour in the darkest of places.

The special features Jimmy’s trademark dry, sardonic wit and includes some jokes which he likes to call “career enders”.

But we very much doubt they could end his career just yet; one that’s spanned more than two decades.

Elsewhere, Rachel has told of her hopes to be on the Channel 4 quiz show “forever”, despite her reported “feud” with the show’s new host Anne Robinson.

The former Strictly Come Dancing star previously admitted to “not bonding” with the host who took over from Nick Hewer back in June, and tensions were reportedly so fraught that the blonde-haired beauty had even considered leaving the show.

But now, the wife of Strictly dance professional Pasha Kovalev, has made it clear that she isn’t planning on going anywhere anytime soon.

Entering her 13th year of the show, Rachel told how she wants to beat Countdown legend Carol Vorderman’s record of 26 years on the show, adding that she hopes to be there “forever”.

The mathematician went on to admit that following Anne’s takeover in the summer, the show has been given a different feel.

Rachel said: “It’s true that Anne Robinson’s arrival has given the show a slightly different vibe.

“Admittedly, she doesn’t mind giving the contestants a bit of a bruising.”

She went on: “Someone asked me if I’m going to stop being ‘naughty’ now that Anne’s in charge.

“Sorry, but this is me. What you see is what you get,” she told Saga.

A month ago, newcomer Anne opened up about the reported feud in an interview with MailOnline.

Despite reports of behind-the-scenes tension, the presenter had nothing but praise for her co-stars, who she called “brilliant”.

When asked directly about claims of a spat, she said of maths whizz Rachel: “Every time I’m astonished how she does that adding up and subtracting – just seconds, absolutely seconds, amazing.”