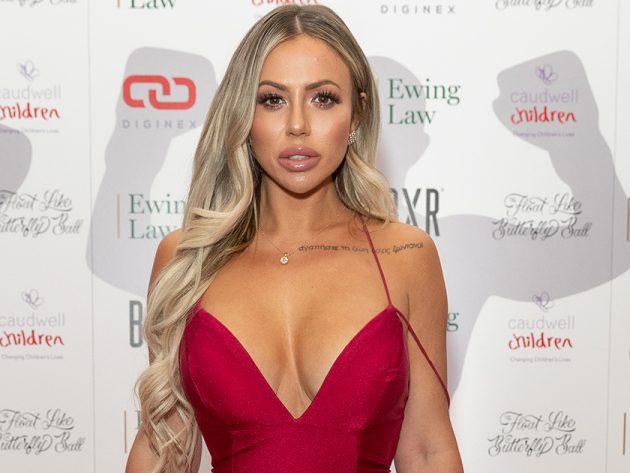 The Geordie Shore star got engaged earlier this year after her fiancé Jacob Blyth got down on one knee while the pair were on a romantic holiday to Ibiza back in June.

And while Holly and Jacob had been planning on tying the knot the summer after next on the same island where they got engaged, it turns out that the pair might be planning their nuptials for much later than anticipated.

Speaking to OK! online, the reality star said that she and footballer fiancé Jacob are planning on putting their wedding on hold as it is “just so much stress”.

IM GUNNA BE A WIFE 😍💍 . . Swipe for the video of the best moment of my life 😭 I can’t believe I’m actually writing this, or that we and everybody else managed to keep it a secret for the last couple of weeks. But on our second anniversary on the island where we first met, the love of my life asked me to be his WIFE!!😍 I was honestly in shock, I believed for such a long time that I didn’t deserve to be loved, But I was so wrong. Jacob is everything I was told I didn’t deserve and more. He’s the most patient, caring and laid back person I’ve ever met. His mental strength is something I’ve never seen in any person on earth, and he’s obviously a fucking 10!!😍 Thank you for accepting every single part of me, past, present and now future. Thank you for seeing how fucking fabulous I actually am and for telling me every single day. And thank you for making me the happiest girl in the world, I didn’t think it was possible to love you anymore than I already did but Jesus this feeling is over whelming! Im going to spend my life making you the happiest man on earth because you deserve nothing less. I never believed In happy endings but I guess I got mine ❤️ I cannot wait to be your wife 😍💍💕

“We were planning on doing it in 2021 in summer but do you know what? It’s so much hassle and just so much stress that I’m thinking we might put it off a little bit.

“There’s no rush, we are only 27 and I think if we rushed through it and then it’s done, it’s like, oh what’s next, so I think we’re going to just enjoy being engaged for a while and then see where we’re at next year.”

The star also spoke about her lavish engagement party, which took place earlier this year, saying, “It was literally the best night ever, honestly. All of the planning and the stress and the money, it was all worth it in the end because it was just such a wonderful night.

Happy birthday to my incredible fiancé 😍❤️ you make me so proud every single day. Looking back at where we were 3 birthdays ago and how much you have accomplished and overcome just makes me so happy🙏🏼 I’m so excited for so many more birthdays with you ☺️ love you forever ❤️😍💕

“I’m planning on having an Ibiza wedding so it’s not going to be kind of like a big ballgown fairytale type thing.

“That’s kind of what I wanted to add a bit of that fairytale aspect to the engagement party because I’m not going to do the big horse and carriage on the actual wedding day, so I thought I might as well do it now and just milk it.”

Holly also revealed that she had asked former Geordie star co-stars Charlotte Crosby and Sophie Kasaei to be her bridesmaids for her big day, whenever it does happen.

She said that she asked the pair while at the engagement party, adding “They were in tears, it was so great.”

“It was such a nice moment. I’ve been planning that for so long.”