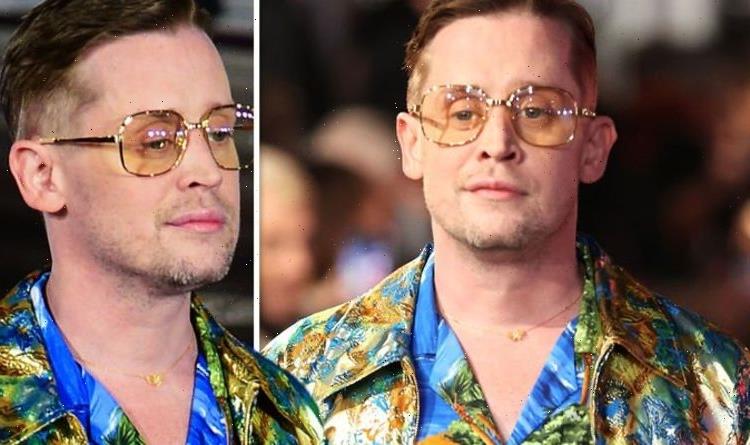 Home Alone actor Macarlay Culkin surprised crowds as he took to the runway at the 2021 Gucci Love Parade yesterday. The Hollywood star, 41, who doesn’t make frequent public appearances, looked like a pro amongst a handful of other A-List celebrities, who were chosen to walk down the Walk Of Fame runway, outside of the celebrated Dolby Theatre in Los Angeles.

A parade of enchanted and deeply free beings

Maculay looked nonchalant as he walked casually down the parade in a pair of yellow tinted sunglasses.

With his blonde hair expertly slicked back, the star strutted down the runway with his hands in the pockets of his slacks.

Wearing a Hawaiian V-neck shirt, Macaulay donned an ornate gold and emerald floral jacket, which was cropped to just above his hips.

His look was finished with the Italian fashion house’s iconic double-G belt in a brass finish.

Also walking down the runway was 30 Seconds To Mars frontman Jared Leto.

The star is also set to play Paolo Gucci in the upcoming film House of Gucci, alongside Lady Gaga.

British actress Jodie Turner-Smith then graced the runway in a red and green feathered coat from the new collection.

Singer Phoebe Bridgers featured in the show which had been hailed as “a parade of enchanted and deeply free beings” by the brand’s creative director, Alessandro Michele.

Earlier this year, the fashion house’s creative director announced that Gucci would abandon the traditional fashion calendar in favour of its own standalone shows twice a year.

Settling into the front row, the best of Hollywood’s stars turned out in anticipation of the Gucci show.

Actress Salma Hayek stunned in a silver sequinned dress and nude pair of platform heels, while singer Lizzo was dressed head to toe in the Italian label.

Miley Cyrus was also present for the show, as was US singer Billie Eilish.

Macaulay’s appearance comes after it was revealed that the former child star will make a cameo as his Home Alone character Kevin McCallister in Home Alone 6.

Back in the early nineties, Macaulay starred in the much-loved Christmas movies Home Alone and Home Alone 2: Lost in New York.

According to The Sun, the 40-year-old will be paid £2.5 million for the brief appearance in the Disney+ movie.

In April this year, it was announced that the Home Alone star had welcomed a baby with his girlfriend Brenda Song, who was also a Disney actress.

Macaulay and The Suite Life Of Zack & Cody star welcomed their baby boy, who they reportedly named Dakota Song Culkin after Macauley’s late older sister, who died after being hit by a car in 2008.

The pair met while working on Cangeland in 2019 and Macaulay later confirmed his relationship to Esquire magazine, saying: “I got money, I got fame, I got a beautiful girlfriend and a beautiful house and beautiful animals.”

The Home Alone star was previously in a relationship with Mila Kunis for eight years, while Brenda was married to Miley Cyrus’ brother Trace, between 2010 and 2013.