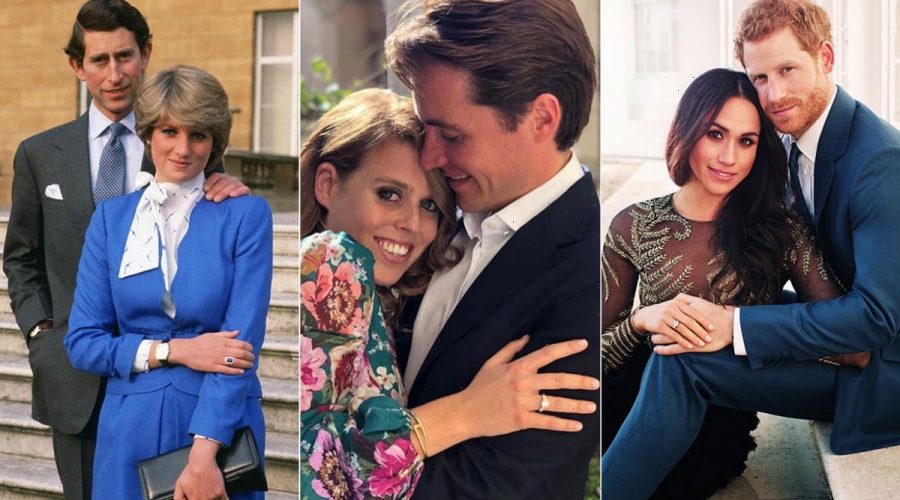 While we don’t see any royals snapping engagement ring selfies to share their exciting news to the world, we are usually treated to an official photograph of the happy couple upon their engagement announcement. From Prince Harry and Meghan Markle‘s loved up pictures through to Prince Charles and Princess Diana‘s iconic images, take a look at official royal engagement photographs through the years…

The monarch got engaged to the late Prince Philip in 1947

The then Princess Elizabeth announced her engagement to Prince Philip in July 1947, and the couple married four months later. Her three-carat diamond ring was made using jewels from a diamond and aquamarine tiara that belonged to Philip’s mother, Princess Alice of Battenberg.

WATCH: 7 of the most expensive royal weddings of all time

Prince Charles and Princess Diana got engaged in 1981

In February 1981, Prince Charles and Princess Diana held an interview to reveal their engagement to the world. Diana’s striking blue dress was the perfect match for her huge sapphire ring, and many years later Kate Middleton also wore a blue gown to match the ring which was passed down to her.

Sarah Ferguson and Prince Andrew announced their engagement 1986, and all eyes were on Sarah’s magnificent engagement ring. The Duchess of York’s precious jewel is one of the most recognisable royal rings, and features a Burmese ruby surrounded by ten diamonds.

The Duke and Duchess of Cambridge got engaged in 2010

It was November 2010, when Prince William and Kate Middleton broke the exciting news that they were engaged. The Duchess was presented with Princess Diana’s engagement ring while on holiday in Kenya.

The royal couple had a special engagement photoshoot

As well as photocall at Buckingham Palace, the couple had a set of professional photographs taken by Mario Testino.

Prince Harry and Meghan Markle got engaged in November 2017, holding a photocall in the memorial garden of Princess Diana and also having a professional photoshoot with photographer Alexi Lubomirski, who was in fact trained by one of Princess Diana’s favourite photographers, Mario Testino.

The official portraits were taken at Frogmore House and Meghan donned a couture gown by Ralph & Russo.

Princess Eugenie and Jack Brooksbank got engaged in 2018

The Duke and Duchess of York announced the engagement of Princess Eugenie and Jack Brooksbank in 2018, and the palace released a set of official photographs. The special pictures were taken at Buckingham Palace’s Picture Gallery. Eugenie wore a floral print Erdem dress paired with Jimmy Choo heels, and of course, that incredible cluster-cut diamond ring!

Princess Beatrice announced her engagement in 2019

When Princess Beatrice and Edoardo Mapelli Mozzi got engaged in 2019, Beatrice’s sister Eugenie shared photos on her own Instagram account, showing the couple cuddling up together. Edoardo worked with Shaun Leane to design Beatrice’s vintage-style engagement ring, and as well as their smiling faces, the precious jewel was gleaming too!