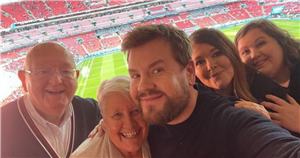 James Corden has reunited with his family in the UK for the first time in more than a year as they gather to watch the all-important football match together.

The TV presenter, 42, has been unable to visit his beloved family for over a year due to the restrictions enforced by the global pandemic.

This meant that the talk show host, who was recently asked to return ancient stone monolith from his garden, was unable to fly back home to his family in Berkshire until the US was moved onto the amber list, meaning people could visit from the States.

The father-of-three, who lives with his wife and kids in the California, would have needed to self-isolate for 10 days and provide two negative Covid tests before he could reunite with his family again.

James, who recently claimed that Prince Harry "wanted to go on his show for years", shared a sweet snap of his family photo from the stands of Wembley stadium to mark the special occasion.

He captioned the shot: “It’s been almost a year and a half since I’ve been in the same room as my mum, dad and my sisters, And what a room to be in!

“I can’t begin to tell you how emotional it’s all making me! Come on England!!!!!”

James Corden wasn’t the only famous face in the stands on Wednesday, as the future King of England Prince William also showed his support at the England v Denmark match.

Not far him stood Prime Minister Boris Johnson and his wife, alongside David Beckham.

The match has the whole of the country eagerly glued to their screens as the team are within reaching distance of taking home the trophy, which hasn’t happened since 1966.

The nail-biting match was hosted at Wembley stadium on Wednesday evening with the entire nation backing the team with fingers crossed across the country for the team.

If the boys can bring home another win on home soil, the team will be up against Italy in the final as they attempt to win the Euros and bring it home.