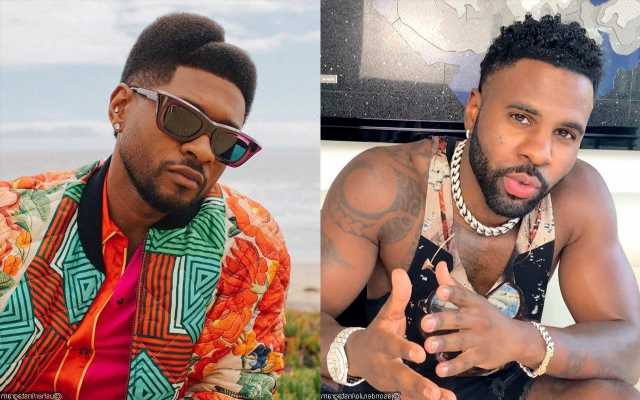 The ‘Savage Love’ hitmaker is handcuffed by law enforcement officials after throwing his fists at the two hecklers, who are now suffering facial wounds, at Aria Resort and Casino.

AceShowbiz –Jason Derulo has been detained by police following a massive brawl in Las Vegas. The “Savage Love” crooner was handcuffed by law enforcement officials after attacking two men who called him Usher.

On Tuesday, January 4, the 32-year-old singer was arrested after he threw fists at the men after one of them called him “Usher.” The said person could also be heard shouting, “F**k you b***h,” at the musician in the video of the incident.

The footage showed Jason pouncing on the hecklers at the Aria Resort and Casino while coming off an escalator and passing a group of onlookers who had taken out their phones to document the nasty fight. In a clip obtained by TMZ, someone in the crowd yelled, “Ayo, why did you slap him, dawg?” and then a separate voice shouted, “Hey Usher, f**k you, b***h!”

It was unclear whether the men really thought Jason was Usher or was making a wisecrack about the two music stars’ resemblance. However, the insult seemed to set the “Swalla” singer off. The crooner was quick to hop over a security rope and punch the man, forcing bodyguards and several other people in the area to try to intervene.

The clip also saw Jason attacking another man and tussling with him on the ground as more people try to tear them apart. The cameraman then exclaimed, “WTF! Don’t touch my boy!” as he backed away.

Following the nasty fight, Jason was taken away in handcuffs. Jason was then removed from the property and issued a no trespassing notice. The men who were attacked reportedly suffered facial wounds but didn’t require hospitalization nor pressed charges.

An eyewitness insisted that Jason didn’t do anything to start the fight. Even though the “Talk Dirty” hitmaker was cuffed, it remains unclear if the authorities have issued any charges against him.

Upon learning of the massive brawl, several fans defended Jason over the decision to throw fists at the person trolling him. “Never thought I’d ever be proud of Jason Derulo until now,” one person praised the star. Another added, “So glad [Jason Derulo] handled those racist jerks. People think they can say anything. Well, they both got their racist a** handed back to them.”