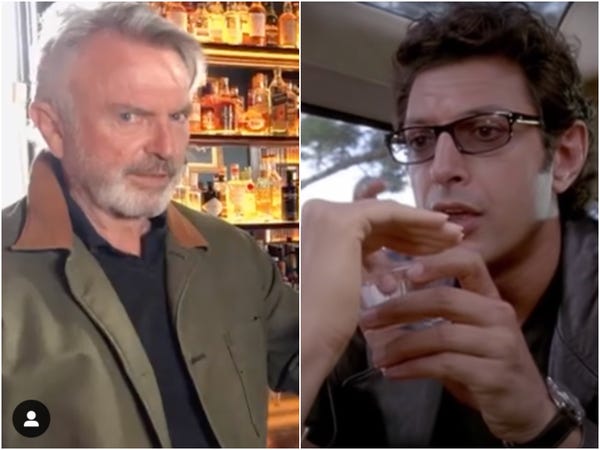 This time, it was Sam Neil's turn for chaos theory. The New Zealand actor, who plays Dr. Alan Grant, took part in a video posted to Jeff Goldblum's Instagram account on Friday in which the two played out the scene.

"You've got slight imperfections in your hand like that and I notice that it might be going over your head like this," Goldblum said while dripping water on Neil's hand.

Neil said: "I don't know if I'm scared or excited."  Toward the end of the video, Ellie Satler herself, Laura Dern, popped up and said: "I've seen this before!"

That was fast! We’ve already hit 1,000 voting actions. As a reward, please enjoy this re-enactment of the “Chaos Theory” scene with my original costars @samneilltheprop and @lauradern! AND! If we get 1,000 more voting actions through @headcountorg (link in bio), I will post another classic Jurassic Park reenactment… #GoodToVote 🙏🏼🦖🇺🇸😎

Ian puts water droplets on Ellie's hand several times and explains that tiny variations and imperfections in the skin will mean that the droplet will never roll down her hand in the same direction twice. Watch the original scene below to compare with Goldblum and Neil's updated version.

Goldblum posted the video after promising to "recreate a classic Dr. Ian Malcolm moment" from the original movie if 1,000 people registered to vote via a link in his Instagram bio. In his caption for the video, Goldblum wrote: "That was fast! We've already hit 1,000 voting actions. As a reward, please enjoy this re-enactment of the 'Chaos Theory' scene with my original costars."

Goldblum also promised that if another 1,000 people registered, he would post another classic Ian Malcolm moment. The original trio are currently shooting "Jurassic World: Dominion" alongside Chris Pratt and Bryce Dallas Howard.

In an exclusive interview with Insider, Goldblum said that the first scene he shot for the movie was with Neil and Dern where they were in a "life and death situation" with brand new prehistoric creatures audiences have never seen before in a "Jurassic Park" movie.

"The three of us were in a tiny little space and we were being menaced by — I can't even tell you — a surprising faction of prehistoric creatures that you've never seen before," Goldblum said.

"We think it might be the last moments of our lives and we're all bonding with each other in an emotional and somewhat hilarious way."

The trio are shooting the movie in the UK up until the end of October, with the film's current scheduled release date being June 11, 2021.