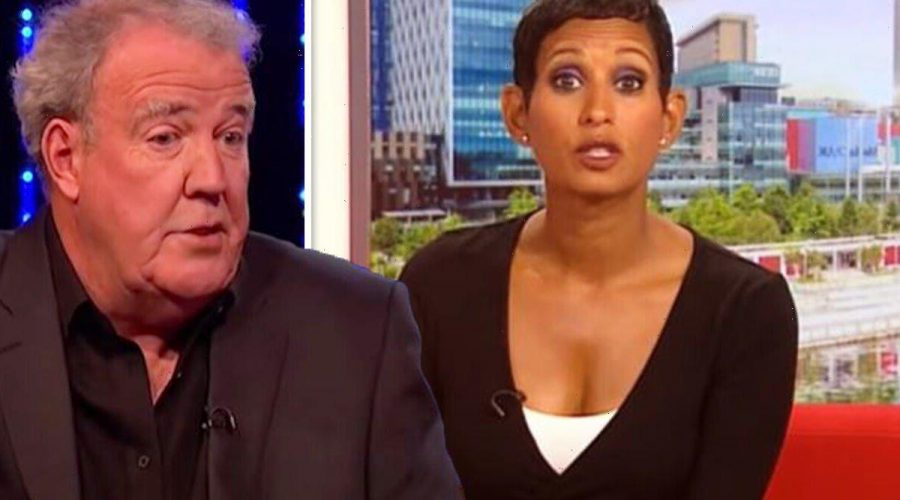 Jeremy Clarkson says he ‘gets on well’ with Camilla

Jeremy Clarkson slammed BBC presenter Naga Munchetty’s six-figure salary after the broadcaster published its list of their top-earners. The Clarkson’s Farm star, 62, took issue with the BBC Breakfast presenter’s wage, which sees her earn up to £369,000.

Naga has a cushy job

The star started off in the rant back in July by justifying war correspondent Orla Guerin’s £164,000 a year salary.

Jeremy claimed that it was deserved because of the dangerous nature of her job.

However, the motoring expert went on to take issue with BBC Breakfast star Naga’s wage.

Comparing her presenting role to Orla’s, he penned: “She doesn’t have to go to work through a hail of machine gun fire.

“She doesn’t have to do her toilet on a battlefield.”

He went on to challenge her salary, also addressing the perks of her job.

“Naga has a cushy job and is doubtless ferried to the studios every day in a Mercedes E-Class with an air freshener,” he added in his column in The Sun.

However, he went on to add that even after she’s finished her job for the day, she’ll be pestered by fans for photos.

Earlier the BBC published a report of their top-earners.

Match of the day presenter Gary Lineker topped the list of the BBC’s best-paid stars for the fifth year in a row, which saw him take £1.35million in the last financial year.

The BBC star’s salary is less from the £1.36million he earned last year which followed a pay cut from £1.75milion.

Other BBC stars who were named in the top 10 included Huw Edwards at number six, Fiona Bruce alongside Fiona Bruce, Scott Mills at number eight and Greg James who came in tenth.

Gary has been presenting Match of the Day since the late 90s following his retirement from professional football.

However, his new contract saw him take a pay cut of 23 percent.