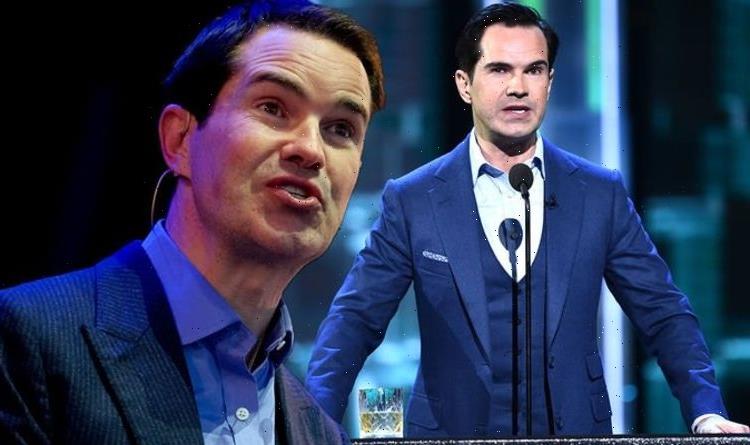 Comedian Jimmy Carr, 49, has compared his fame to having Alzheimer’s disease “in a lovely, friendly village”. The funnyman also questioned why fellow celebrities “moan” about the attention they receive, as it is a lifestyle they have chosen.

Jimmy hit out at people complaining over the hardships of living life in the public eye, even going so far as to describe being a celebrity as “the natural state”.

During the podcast Out To Lunch With Jay Rayner, the host asked him about his life in the spotlight.

In response, he said: “Yeah. Love it. I can’t understand people that moan about it.

“Cause also you don’t have to be. It’s a lovely thing, it makes the world a very friendly place.

The star went on to suggest that fame is similar to suffering Alzheimer’s disease while living in a small village, as everybody knows you but you don’t know them.

“I’ve got a theory that, actually, being famous is the natural state…” he said.

“I suppose being famous is a bit like living in a lovely, friendly village but you’ve got Alzheimer’s because you don’t know anyone but they know you.”

In light of this controversial joke, it comes as no surprise that Jimmy is not afraid of cancel culture.

The star has maintained he isn’t concerned about being cancelled for his jokes, even though they have been known to sometimes rub people up the wrong way.

Jimmy opened up about his joke-writing process, revealing that his one-liners are all tested in front of an audience before they even make it into his stand-up tours.

“’You test them in front of an audience. The audience tell you two things. They tell you whether it’s funny or not, it’s binary, it either gets a big laugh or it doesn’t and they tell you if it’s acceptable.”

The comedian went on to insist that saying “outlandish or cruel” things on stage that leave audiences gasping or whooping doesn’t amount to anything in a comedy setting if there’s “no laugh first”.

He also complained that it was much “easier to be politically correct” for those who didn’t choose to do stand-up comedy for a living.

He added: “It’s a tough thing because you go, what actually makes you laugh? It’s easier to be politically correct when you’re not trying to make 2,000 people laugh consistently for two hours…

The star went on to defend his divisive material by claiming that the “best reward is a life well lived” and that people should simply “move on and laugh about it”.

During the interview, Jimmy got candid about how he feels he is perceived, suggesting that his on-stage persona often gives people a false impression of his personality.

The comedian even opened up about his panic attacks, which he once said he suffered from each morning.

Out to Lunch with Jay Rayner is available weekly on all podcast providers.