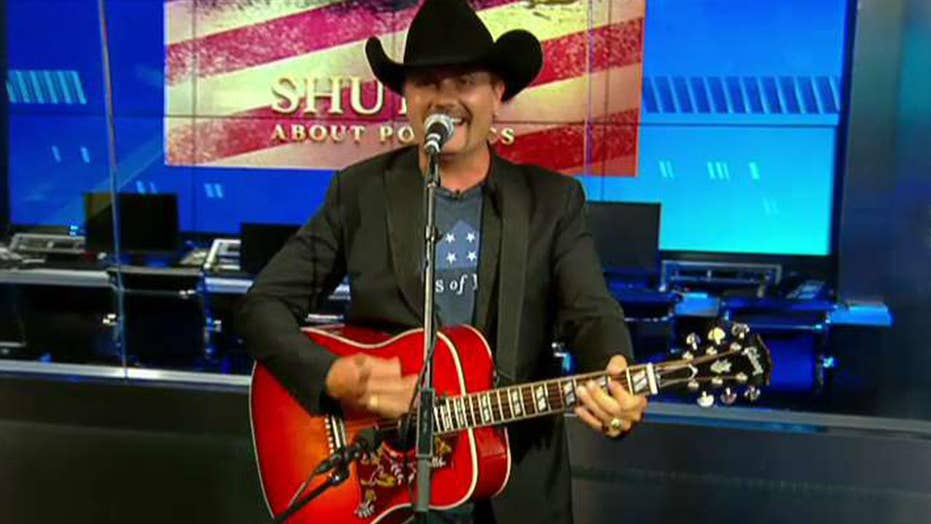 John Rich performs ‘Shut Up About Politics’ on ‘The Five’

Country star John Rich and ‘The Five’ co-host Greg Gutfeld co-wrote the new song; all proceeds from ‘Shut Up About Politics’ will be donated to Folds of Honor — visit facebook.com/thefivefnc for details.

John Rich, of Big & Rich, debuted his new song "Shut Up About Politics" during an appearance on "The Five" Friday.

Taking the stage in NYC, the 45-year-old country music star sang the light-hearted tune with the help of "The Five" co-hosts including, Greg Gutfeld, who co-wrote the single.

Of Gutfeld's input, Rich said: "We had the chat about it would be fun to come up with a song when you guys came to Nashville and you [Gutfeld] said, 'I'll send you some ideas' … and you had some really good lines and 'shut up about politics' was in there and so I pulled that one out and built the song."

Rich also noted that all of the proceeds from the song will be donated to Folds of Honor — a non-profit that provides scholarships to children and spouses of fallen and disabled service members.

"Well, we thought if we're going to go through this whole process of recording it, why not go ahead and put it up online where people can download it? It's 99 cents and 100 percent of that 99 cents goes to these guys – to Folds of Honor," he explained.

"Shut Up About Politics" is out now.