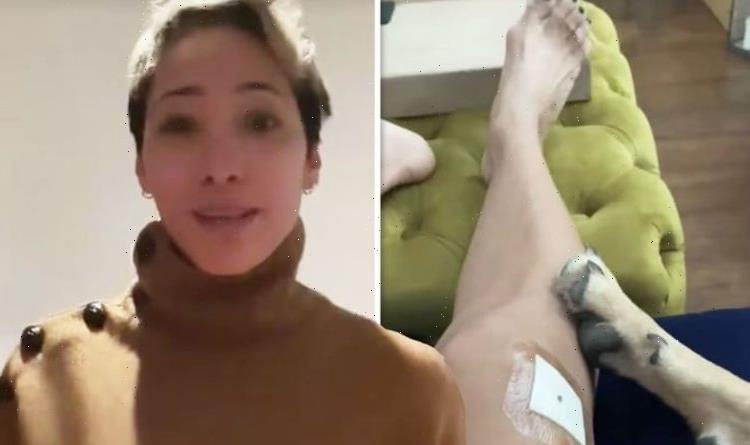 Karen Hauer, 39, who appeared in the current series of Strictly Come Dancing 2021 alongside actor Greg Wise, 55, watched the show from a distance as she recovered at home last weekend. The Venezuelan-born professional dancer previously explained that she’d be forced to miss out on attending Saturday night’s semi-final and is now reportedly not expected to return for the show finale this week, according to Mail Online.

The Strictly pro previously shared on Instagram saying that she had injured her knee during rehearsals.

Despite having left the show a number of weeks ago, Karen has been cheering on her fellow dancers and their celeb partners in the audience.

Taking to the picture-sharing site on Saturday night, she shared a video of herself cooking alongside her boyfriend Jordan Jones Williams, who accidentally “tripped” the star.

“I think you can hear the laundry going. I’m very domesticated these days.”

Addressing her injury, she explained: “I have to be sitting and standing up. I can’t sit for too long but I can’t stand for too long either.

“But in the meantime, Jordan and I are going to be cooking some dinner. And as you can see I have a little friend who is making a barbecue.”

Karen panned the camera across to her beau, who could be seen in the garden.

She continued: “I’m just getting ready to watch Strictly tonight. I can’t wait to see the semi-final and what everyone’s been doing.

“I’m happy to be clapping from home and making sure that everybody does brilliantly today.”

Her boyfriend could be seen in the background, as she joked: “He just tripped me and he just kicked me.”

He accidentally brushed into Karen’s leg, while she spoke with fans on social media.

She went on: “I can’t believe he just tripped me,” before adding: “I can’t wait to see who is in the final.”

The performer had previously explained that she was due to undergo treatment on her injured knee after confirming she will be watching Strictly from home.

Karen joined the show in 2004 and it will be the first time in a decade the pro has missed a final.

Addressing her injury last week, Karen lamented: “So currently I have two things wrong with my knee.

“So there’s a little bit of a tear on my meniscus and then there’s also a little cartilage flap behind my knee but they’re very minor so instead of an op I got a knee injection so that’s good news.”

She continued: “I mean, I am terrified of injections and needles. I hate needles so I’m glad that it happened already.

“I pretty much bit off Jordan’s jacket, but at least I’m not going into surgery which is good for now.

“I need to rest for a couple of days and then I start rehab on Monday.”