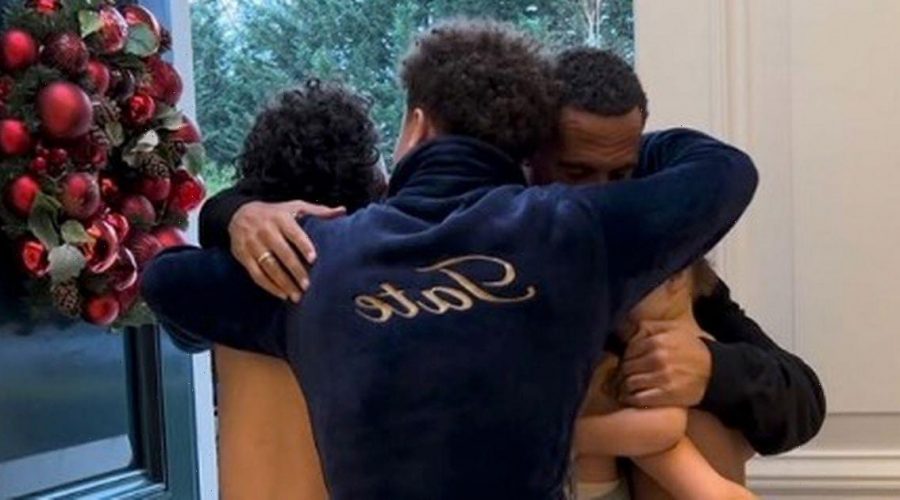 Kate Ferdinand has been left emotional at her husband Rio returning home to the UK after spending a month in Qatar for the World Cup.

The 31 year old former TOWIE star, who recently shared a peak inside her intense fitness routine, took to her Instagram feed to share a heartwarming photo of the pundit at the front door as he hugged his children.

The picture posted on social media showed the dad wrapping his arms around all four of his children, who crowded around him. Tia, who carried Cree in her arms, wore a pair of green shorts and crop top as she tucked them both into their dad's chest.

Lorenz simply donned a pair of shorts as he embraced his father while Tate, who wore a navy dressing gown, put his arms around all four of them – melting into the reunion with his siblings.

"Daddy’s home 4 weeks has felt like 8," Kate wrote in the caption with a teary-eyed emoji. "Couldn’t be happier to have my husband home," she added, alongside a red heart emoji.

Rio immediately responded: "Happiest when with family [red heart emoji] Missed you all sooooo much x".

Fans also flocked to the comments section to gush over the family as one person wrote: "Priceless photo merry Christmas to you all xx," with a red heart emoji.

Another said: "What a lovely welcome home." with a red heart emoji.

While a third added: "This warms my heart. Family goals right there. Pardon the pun," with a red heart emoji.

Rio, who flew back to surprise Kate during the World Cup, has been in Qatar to join Gary Lineker in presenting the BBC's covering alongside Alan Shearer and Pablo Zabaleta.

Following a very tense match between Argentina and France on Sunday 18 December, Argentina emerged victorious with Lionel Messi lifting the trophy before chanting with the team.

Fans all over the globe were left on the edge of their seats during the match, which started out in Argentina's favour with Messi scoring a goal, quickly followed by Ángel Di María. But Kylian Mbappé managed to bring France back into the game with two back to back goals in a spectacular performance.

The game went into extra time, during which each team scored a goal, leaving them no choice but to go into penalty shoot outs.