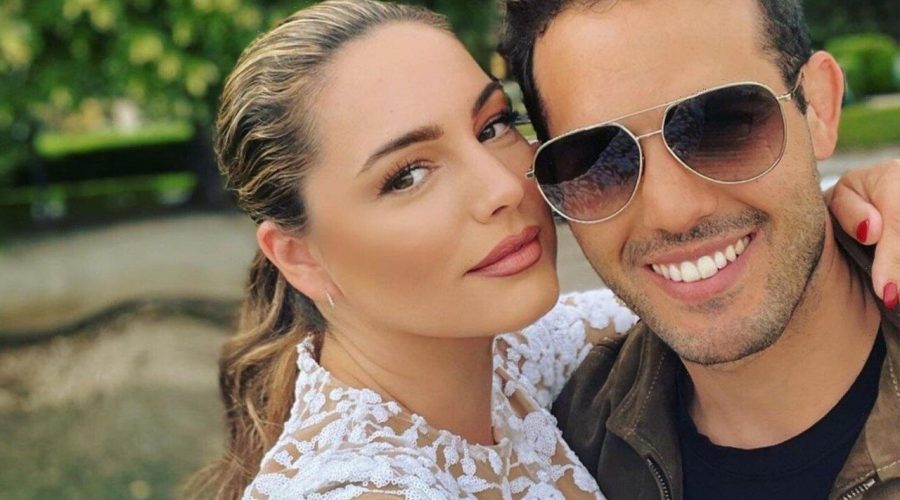 Kelly Brook and her long-term boyfriend Jeremy Parisi walked down the aisle on Saturday, July 30 in a lavish Italian wedding party in Villa Nota Pisani in Arpino, central Italy.

AceShowbiz –Kelly Brook is now a married woman! The 42-year-old model married Jeremy Parisi in his native Italy on Saturday, July 30, after seven years together.

Kelly wed the 37-year-old fellow model, who she secretly got engaged to, at the stunning Villa Nota Pisani in Arpino, central Italy. Kelly wowed in a classic white gown with long lace sleeves and bodice, complete with a short veil and tiara.

The brunette beauty shared several videos from the celebrations, including the couple’s first dance, fireworks being set off as they danced and two chefs preparing food for their guests. Kelly later changed into more comfortable attire of trousers, sandals, and a blouse, but kept her veil intact. She shared clips of the newlyweds dancing outside and being serenaded by Maurizio Marchini, who led their loved ones into song performing “That’s Amore.”

Their tables were decorated beautifully with an abundance of red roses, candelabras, and hand-designed menus. Kelly captioned a series of clips on her Instagram Story, “Just Married.”

Jeremy also shared a selfie of the bride and groom, showing off their wedding rings. He captioned the post, “Just Married.” And he also posted a video of the loved-up pair feeding each other a traditional Italian dessert.

“Kelly and Jeremy are getting married this summer in Italy. They kept it quiet for as long as they could but they’re happy and can’t wait to make it official,” a source had told The Sun newspaper of their wedding plans last month. Kelly getting hitched comes just over a year after she admitted getting married was not part of her plans.

She said, “I’ve got a bucket list and I have to say a wedding is not on it. I feel like marriage and children are not things I’ve wanted. I like travelling and being with my partner, I like animals, working and being independent, and I like my freedom. I like being spontaneous!”

“There are so many things I love, I think marriage and children would stop me doing them. I try to imagine how it would be, and when you have children it’s a huge commitment,” Kelly continued. “It’s very hard to change your ways when you get to your forties and I don’t think it’s for everyone. I’m not saying never, it’s just not on my radar. I think about it every now and again, then I quickly forget about it.”

It comes after the Heart radio DJ asked Jeremy to marry her when they were on holiday in 2020, but he rejected her proposal. She previously said, “When we were in Antigua and the sun was setting and we were up at Shirley Heights I said to Jeremy, ‘Will you marry me?’ He said, ‘Be quiet, there are people around’.”

“So I tried to propose but he said it was too busy and told me to be quiet! I’ve asked him, but it wasn’t private enough.”

Kelly, who has dated rugby players Danny Cipriani, 34, and Thom Evans, 37, has previously been engaged to actors Jason Statham, 55, and Billy Zane, 56, and she was due to marry “Gladiators” star David McIntosh, 36.