Kim Kardashian and Pete Davidson might really become a thing, at least according to Us Weekly. The outlet reports that the surprise pair may have a romantic future after all. A source told the tabloid that Kardashian “is falling for” Davidson, with whom she spent multiple nights out last week. “He makes her feel good, and she’s excited to see what happens,” the source added.

Kardashian’s inner circle is in support of the new relationship, the source said: They’re “eager for Kim to have fun and be free” amid her ongoing divorce from Kanye West. 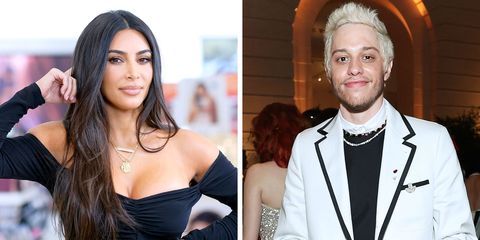 A second source told Us that things aren’t official between Davidson and Kardashian for now, but that’s subject to change. Kardashian is “single and having fun at the moment [but] things could turn romantic [between them],” that source said.

Davidson and Kardashian’s exact relationship status is a little nebulous at the moment. TMZ reported that the two were seen being affectionate in New York City, conflicting with reports that they’re just platonic friends.

“Kim and Pete like each other,” that source said. “They are trying to play it off that they are just friends, but it’s a little more than that right now. They’re having a lot of fun together. Pete makes Kim laugh and makes her feel special. Pete is obviously thrilled and has a major crush on Kim.”