"He's here and he's perfect!" she shared with her more than 60 million followers on the social media site.

She added in another tweet that her newborn son looks like her third child, one-year-old daughter Chicago.

The couple's surrogate went into labour on Thursday. Kardashian West confirmed in January that they are expecting a baby boy.

Kourtney Kardashian let the cat out of the bag while filming The Ellen DeGeneres Show on Thursday, revealing that her sister rushed to the hospital following the news. 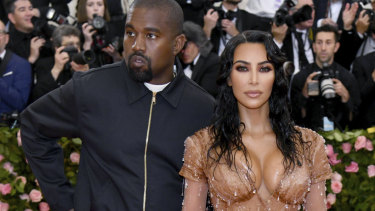 The eldest Kardashian sibling was on the talk show to surprise her mum and manager, Kris Jenner, with six of her grandchildren in honour of Mother's Day, but one family member was MIA.

"Kim was supposed to be here," DeGeneres said, setting up another surprise for Kris.

"My mum doesn't even know this, but Kim's surrogate went into labour," Kourtney said. "So she's at the hospital. … So I have to go have a baby."

A shocked Kris replied, "No! What are we doing here? C'mon, Ellen."

The announcement comes just day after Kardashian, 38, shot down rumours that her second son had already been born.

"Wait just saw news our baby boy came but that's not true!" she tweeted ahead of the Met Gala Monday. "It's Met Monday, I'm in NYC. I would be at the hospital lol."

The couple have three children: North, 5, Saint, 3, and Chicago, 1. Chicago was also born via surrogate due to Kardashian West's previous complications with pregnancy.

The Kardashian/Jenner clan has been experiencing some baby fever lately: Khloe welcomed her first child, True, in April 2018, while 21-year-old Kylie Jenner gave birth to Stormi Webster on February 1, 2018. Chicago West was born less than a month earlier.