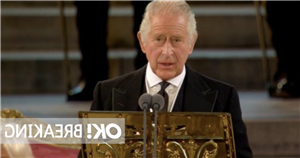 King Charles III spoke of feeling "the weight of history" as faces the daunting task of taking over from his mother, Queen Elizabeth II.

The newly-appointed King has put his own grief to one side in the days since his beloved mother's death, and stepped in to ensure duties are undertaken and plans for her funeral are underway.

On Monday morning, 1,200 people gathered to hear MPs from both parliamentary parties and peers give speeches at Westminster Hall – and the King was present too, with his Queen Consort Camilla at his side.

Two empty thrones were placed at the head of the chamber, as the band of the Household Cavalry played sombre music in the archway behind, ready for King Charles and Queen Consort Camilla’s arrival.

The state trumpeters of the Household Cavalry took their post on the south window balcony of Westminster Hall to mark the beginning of the ceremony.

The King’s Body Guard of the Yeomen of the Guard and the Honourable Corps of Gentleman at Arms then processed into Westminster Hall from the north door to take up their position.

Police flanked the road in Parliament Square, which was shut down to traffic while crowds and reporters lined the pavements.

People erupted into cheers with many raising their phones to take photos and videos as Charles’ motorcade arrived and drove into the gates.

Speaking to those in attendance, Charles admitted to feeling "the weight of history" in the days that have followed the Queen's death.

He began: "As I stand before you today, I cannot help but feel the weight of history which surrounds us and which reminds us of the vital parliamentary traditions to which members of both Houses dedicate yourselves with such personal commitment, for the betterment of us all.”

The King went on to thank MPs and peers for their messages, saying: “I am deeply grateful for the addresses of condolence.”

He said the addresses “touchingly encompass what our late sovereign, my beloved mother the Queen, meant to us all”.

Charles’ speech today comes after he filled in for the Queen in Parliament earlier this year for its State Opening.

It was the first time the late monarch failed to attend the event in 59 years.

A Buckingham Palace spokesperson said at the time: "The Queen continues to experience episodic mobility problems, and in consultation with her doctors has reluctantly decided that she will not attend the State Opening of Parliament tomorrow."

The statement continued: "At Her Majesty’s request, and with the agreement of the relevant authorities, The Prince of Wales will read The Queen’s speech on Her Majesty’s behalf, with The Duke of Cambridge also in attendance."