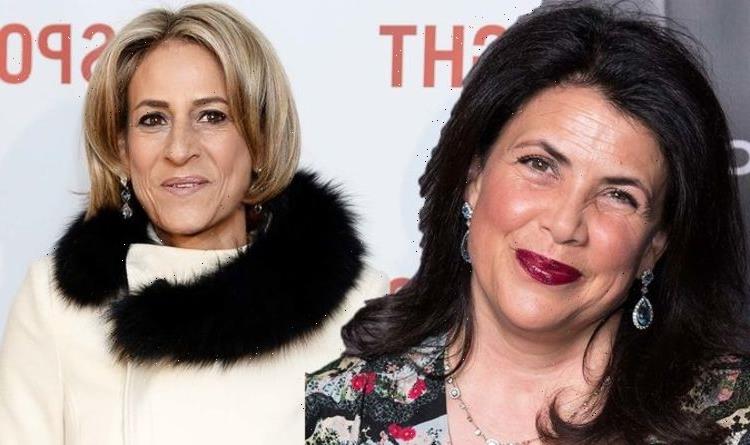 She wrote: “Dear @BBCNewsnight why are we still watching people talking from a fishtank @graceblakeley (with good eyebrows) and doss house @rcolvile (albeit in cable knit) why not get everyone into the studio?

Emily was quick to respond to Kirstie’s demands as she quote-retweeted her post.

The BBC host explained: “We want nothing more then getting our delightful guests back in the studio with us.”

She added: “Bear with us!” alongside the hashtag “#newsnight”.

Kirstie then responded: “I always, always do, I just want to see in person debate, not be distracted by loft conversion.”

The exchange sparked a debate among Twitter users, with some backing the return to the studio and others supporting the use of video calls.

“Unnecessary waste of time and cost for them, especially usually only for a 10 minute slot on programme, or even less.”

Lirogiro responded: “In studio chat inevitably makes the panels more London centric as less people from around the country can travel to be on a show at that time – online debate is much better for national representation.”

Blue_Tweedle echoed similar claims, adding: “Why? We are used to it now and it might help make UK current affairs a little less London-centric.”

DavidHerdson commented: “Not everyone lives in London (or Manchester, or wherever the studio is – but I’m guessing London), and not everyone who doesn’t will want a night away and two disrupted days travelling to be in it.”

VintagePleasure agreed with Kirstie but denounced the language she used in her tweet.

They wrote: “I can see your point about in person debates. It definitely leads to a more nuanced discussion.

“However does bringing people’s looks and state of their surroundings really help?

Regency31 simply pointed out that the UK is “not out of this pandemic”.

The Channel 4 star has previously been outspoken about her views on the coronavirus lockdown.

Commenting on scenes from London during the Euros 2020, where fans took to the streets to celebrate, the presenter pointed out that rules were still in place to prevent large amounts of people attending weddings and other events.

She tweeted: “I love these scenes, but if I’d had a wedding planned for next Saturday, I’d be p****d off as hell.”

30/09/2021 Celebrities Comments Off on Kirstie Allsopp slams Newsnight decision as host Emily Maitlis fires back Bear with us!
Lifestyle