Kit Harington, 32, and his other half Rose Leslie, 32, have just announced their involvement in a silent charity auction to raise money for multiple sclerosis (MS) research. The Game of Thrones stars are offering fans the opportunity of a lifetime with an invitation to have dinner with them at a private members’ club in London. The lucky winner will be able to invite five friends to join them in their meeting with the couple. Other priceless prizes from the auction include a personal shopping trip with former Vogue Editor Ginnie Chadwyck-Healey, a two hour golf lesson and lunch with sporting legend Tony Johnstone and tickets to the men’s and women’s Wimbledon finals.

All funds raised from the auction will go towards the MS Society’s vital research programme to find treatments for people living with MS.

The charity describes MS as a chronic condition that affects over 100,000 people in the UK. It damages nerves in your body and makes it harder to do everyday things, like walk, talk, eat and think.

The auction will officially close at 11pm on May 16, and the winners will be announced that evening at celebrity quiz event SMS Battles, which Kit and Rose will also be attending.

The King in the North actor first met and fell in love with Rose on the set of the HBO show, in which their on-screen characters became involved in an epic love story.

Kit and Rose announced their engagement in September 2017 and went on to tie the knot last summer.

The wedding’s guest list was packed with the couple’s co-stars from Game of Thrones, including Peter Dinklage, 49, Sophie Turner, 23, and Emilia Clarke, 32. 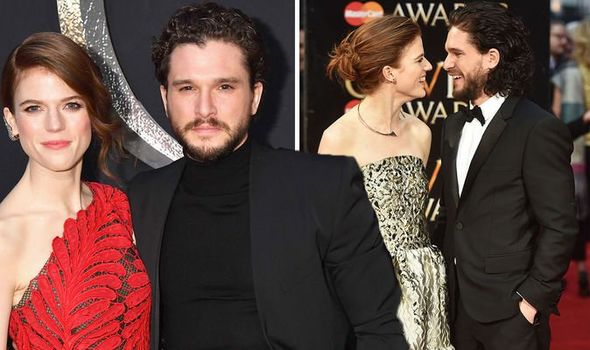 Rose starred in the drama series from seasons two to four, until her character Ygritte tragically died in Jon’s arms.

During an interview with People Magazine, Kit revealed his favourite scene he starred in opposite his wife.

The British actor surprisingly admitted: “I liked her death. I know it sounds bizarre.

“I thought she nailed that. And it’s the first time in Thrones that slow motion was used and I think it’s a beautiful, cradling moment as this battle is raging in the background.

“It was one of those incredible shots.”

Kit also spoke out about missing his Game of Thrones colleagues after filming the final season, telling the publication: “The saddest thing is that we may never be cast again together because we’re too synonymous with Thrones.

“You know, I’d love to work with Sophie on something, but are people only going to see Jon and Sansa?

“It’s gonna be hard to get away from that.”

“I’d love to work with Rose, but we’re married and we played these lovers, so are we ever going to get to do that?”

Full details about the prizes are available at www.smsbattles.com. To find out more go to www.mssociety.org.uk and search ‘SMS Battles’.

Game of Thrones season 8 airs on HBO in the US on Sundays at 9pm ET and on Sky Atlantic and NOW TV in the UK on Mondays at 2am and 9pm BST.