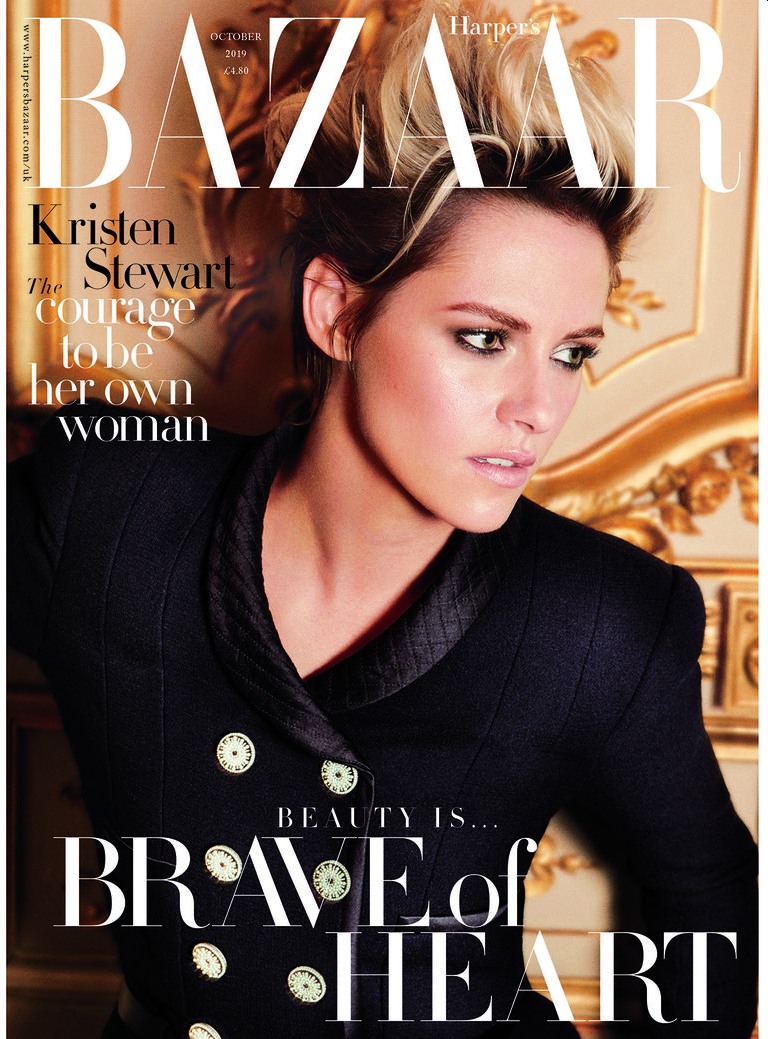 Kristen Stewart covers the October issue of Harper’s Bazaar UK to promote Charlie’s Angels for the most part. Probably a little bit to promote Seberg, but that film isn’t discussed here, so maybe not. Kristen’s interviews have gotten better as she’s gotten older. She really did spend a decade working on herself and learning and growing and figuring out who she is. She’s more confident now and funnier too. Not so angsty. In this Bazaar interview, she talks a bit about Robert Pattinson – which is sure to make headlines – and a lot about her sexuality and how she doesn’t define it or put a label on it. You can read the piece here. Some highlights:

Redefining awkward: “I try to avoid the word ‘awkward. I want to reclaim that word, because it’s been used too violently against me.”

On her relationship with Robert Pattinson: “When me and Rob were together, we did not have an example to go by. So much was taken from us that, in trying to control one aspect, we were just like, ‘No, we will never talk about it. Never. Because it’s ours.’”

Why she did Charlie’s Angels: “I did Charlie’s [Angels] because I’m a huge fan of Liz Banks and I always felt she vouched for me. I always felt, like, she doesn’t think I’m a freak.” It was still an act of friendship, but one that allowed Stewart to show off her little-known goof ball side and exceptional fighting skills. When her friends watched the trailer, they told her: ‘Dude, that’s you. Finally!’”

The fame monster: “I’ve tried to say this before, and I don’t think I’ve ever articulated it properly… but people get mad at you because you’re in such a grand position, so if you don’t hold that up, you don’t deserve it. I never valued the fame thing as much as I valued the experiences I got to do while working, and it perplexed me so much… Some people were like, ‘You ungrateful a–hole!’ and I was like, ‘ Yeah, completely, I don’t want to be famous, I want to do my work!’”

On the younger famous people: “They have this insane agency. And the confidence! That is baffling! I’m like, how are you so confident? You’re so young!” Sometimes, she’s sceptical: the virtue-signalling can be a little forced, a little on point. She names no names, obviously, but describes, tantalisingly, “a couple of people who are like real activists, really at the forefront of progress, and I’m like, ‘You are a deplorable fraud! And all you really care about is people looking at you.’”

Talking about her sexuality now: “I think I just wanted to enjoy my life. And that took precedence over protecting my life, because in protecting it, I was ruining it. Like, what, you can’t go outside with who you’re with? You can’t talk about it in an interview? I was informed by an old school mentality, which is – you want to preserve your career and your success and your productivity, and there are people in the world who don’t like you, and they don’t like that you date girls, and they don’t like that you don’t identify as a quote unquote “lesbian”, but you also don’t identify as a quote unquote “heterosexual”. And people like to know stuff, so what the f–k are you?’” She has no answer. She doesn’t identify as bisexual, she doesn’t identify as a lesbian, she doesn’t like labels. She’s a different person every day she wakes up and delighted by that. “I just think we’re all kind of getting to a place where – I don’t know, evolution’s a weird thing – we’re all becoming incredibly ambiguous.And it’s this really gorgeous thing.”

She doesn’t give AF about Marvel: “I have fully been told, ‘If you just like do yourself a favour, and don’t go out holding your girlfriend’s hand in public, you might get a Marvel movie.’ I don’t want to work with people like that. Literally, life is a huge popularity contest.”

“When me and Rob were together, we did not have an example to go by.” Literally Brangelina. I mean, I know those situations were completely different, but… really? Does she think that she and Rob were the first two costars to ever get together and have their relationship exploited by a studio machine? As for her awkwardness: “I want to reclaim that word, because it’s been used too violently against me.” OMG, Kristen!!! That made me laugh so hard. The rest of it is fine – I actually take comfort that Kristen is secretly checking on all of the garbage youths’ Instagram accounts and quietly judging the performative nature of their activism. That seems on-brand for her.

"I try to avoid the word 'awkward'," Stewart says, remembering that time. "I want to reclaim that word, because it’s been used too violently against me." Kristen Stewart opens up to @bazaaruk – via link in bio. Interview by Sophie Elmhirst Kristen Stewart wears @chanelofficial Styled by @MirandaAlmond Photographed by @AlexiLubomirski #kristenstewart #harpersbazaar

27/09/2019 Celebrities Comments Off on Kristen Stewart: Robert Pattinson & I ‘did not have an example to go by’
Lifestyle