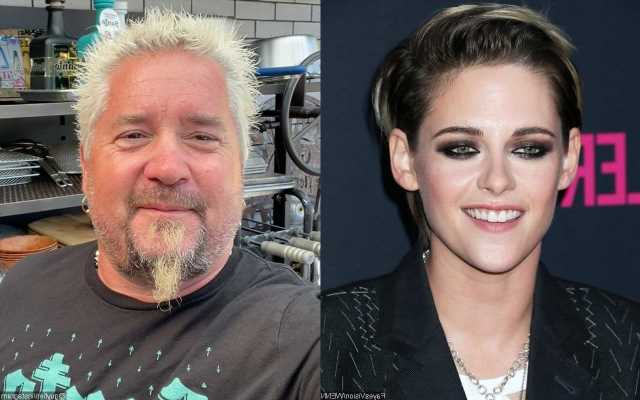 The ‘Spencer’ actress is thrilled when she finds out the favorite celebrity chef says he would love to oversee her upcoming nuptials with fiancee Dylan Meyer.

AceShowbiz -Top chef Guy Fieri is down to wed Kristen Stewart and her fiancee after the actress named him as her dream officiant.

The “Twilight” star recently confirmed reports she and Dylan Meyer are engaged and named the U.S. TV favourite as the guy she’d like to oversee the couple’s vows during a recent appearance on “The Howard Stern Show“.

“We did hear that Guy Fieri from the Food Network officiates a lot of gay weddings, so, the idea of that man – that sweet, sweet spiky headed man – coming to our wedding and officiating it, it just makes me laugh so much,” Kristen said.

And now Fieri has responded, telling Kristen he’d be happy to do whatever she needs him to do.

“Hey Kristen, Guy Fieri here, and I heard through the Flavortown grapevine that you are looking for a ‘sweet spiky-haired’ officiant for your wedding,” he said in a video message to the star, recorded for her appearance on U.S. morning show “Today“. “I’m all in!”

A stunned Kristen made it clear she wasn’t joking about asking Fieri to officiate at her wedding.

“Absolutely! Do you know where he lives? What’s his address? Does he live in L.A.? We should talk about this,” she excitedly told show co-hosts Hoda Kotb and Savannah Guthrie.

Dylan popped the big question after Kristen revealed she “wanted to be proposed to.”

“So I think I very distinctly carved out what I wanted and she nailed it,” the actress opened up.