Don’t mess with Kylie Jenner! The cosmetics queen always has a comeback, this time it was aimed at a fan who called her Power Rangers Halloween costume ‘plastic’.

It seems nothing can ruin Kylie Jenner‘s Halloween spirit! The 23-year-old, who goes all-out for Halloween, got celebrations started when she dressed up like a Power Ranger on October 29, and posted a series of videos on Instagram and Tik Tok. One social media user commented on her Tik Tok video, writing, “SOMEONE SAID PLASTIC RANGERS PLEASEEEE.” In response, Kylie swiftly clapped back, “and we love recycling.”

The Kylie Cosmetics CEO was joined by her pals Anastasia Karanikolaou, Victoria Villarroel, Sofia Villarroel and Carter Gregory, who got in on the fun, wearing pink, blue and yellow Power Ranger looks. All the ladies, and Carter, had outfits made out of the same seemingly stretchy material, but with different styles. Kylie’s look featured a red crop top adorned with white diamonds on the sleeves. She also wore a white belt around her waist, with red leggings and white boots featuring matching red diamonds.

The Keeping Up With The Kardashians star rocked a long, straight red wig that cascaded all the way down her back. Of course, the Power Rangers look wouldn’t complete without dark shades. It comes just a few days after Kylie’s famous family made headlines over Kim Kardashian’s controversial 40th birthday trip. 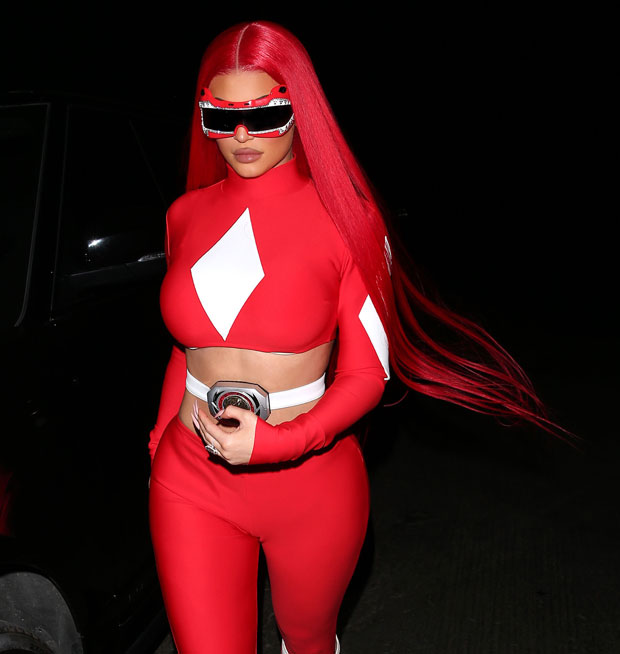 One person who was noticeably missing from the family getaway was Kylie. “I was thinking about photoshopping Kylie into this photo,” big sis Khloe Kardashian teased in the caption of a vacation photo. This led fans to wonder where Kylie actually was. Kim’s birthday crew included her siblings, along with her mom Kris Jenner, Tristan Thompson, Scott Disick, Corey Gamble, La La Anthony, Fai Khadra, and even more family and friends. They arrived in French Polynesia right before Kim rang in her 40th year on Oct. 21. During that time, Kylie was gearing up to release her leopard-themed makeup collection, which dropped on Oct. 26.