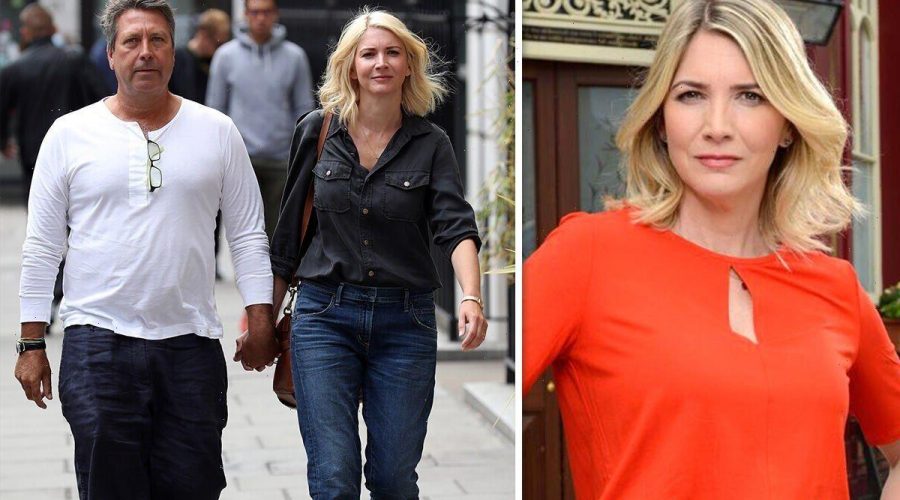 Waterloo Road actress Lisa Faulkner, 50, and her MasterChef star husband John Torode, 57, have a blend of teenage and adult children between them from before they got together. The former Celebrity MasterChef winner described how the pair sometimes enforce certain boundaries, including phones being “taken away” at dinner time, to ensure they have meaningful chats with their kids in an exclusive interview with Express.co.uk last year.

Lisa spoke about her family life with John as part of a wider interview about encouraging families to be more connected during meal times.

The star teamed up with cracker company Carr’s to help create some tasty recipes that will hopefully spark conversations and deter families from looking at their phones during dinner.

Lisa opened up about her blended family – and how taking the time to eat at the dinner table was often the best way to get some “proper conversation” with their teenage children.

The actress and presenter is mother to 16-year-old adopted daughter Billie, while John has grown-up children Casper and Marselle from his first marriage, and teenagers from another relationship, Jonah, 17, and Lulu, 15.

The star spoke about how we are “all guilty of not spending enough time away from our phones”.

“I do think our kids in the younger generation have grown up with phones, so they don’t think of it as bad manners or rude to be with each other and on their phones,” Lisa explained.

“They’re just also used to doing it. Whereas as the older you get, the more people go, ‘Oh, well, I think you need to put the phone down at the dinner table.’

“And then my dad’s generation would be, ‘Are you really going to look at your phone now?!’ So I think it has changed, but I do think we need to always keep an eye on it and keep that human contact.

“Absolutely, we need phones and we need them in our lives – and social media can both be a really good thing and a really bad thing.

Asked about what her policy is with letting the kids have their phones around the dinner table, she replied: “It’s not a rule for every single meal time because I don’t think we could enforce it, but I think they pretty much listen to the fact that… Yeah, if we’re having dinner, they don’t have their phones.

“You know, they’re sometimes sneaked on, but they’re usually taken away again,” she added.

Asked how she manages to get the teenagers off their phones, Lisa suggested: “I think if we were watching TV and eating it would be very difficult to say, ‘Oh, you can’t have your phone’, because you’re still watching a screen.

“But if you’re not watching television, you’re actually just sitting down and interested – even though our kids are not interested in anything (teenagers don’t want to have a whole conversation with you)…

“If you’re making food together or just having a little chat or they’re trying something that they really like, you’ll get a little bit of conversation out of them before they go back upstairs.”

Lisa met Celebrity Masterchef show judge John Torode when she appeared on the show and won back in 2010, with the couple beginning their courtship that same year.

Lisa and John are a real TV power couple, with John having hosted MasterChef since 2005 and Lisa recently joining the cast of BBC One’s brand new Waterloo Road as Hannah King.

The pair have also coupled up on camera to co-present John and Lisa’s Weekend Kitchen, which launched on ITV in 2019.

Lisa explained how she hoped to encourage more sociable mealtimes with her new Carr’s creations.

Revealing that two thirds of Brits use a phone during meals, Carr’s is encouraging the nation to enjoy more meaningful hosting moments, working with Lisa Faulkner to create recipes that help to eliminate distractions and encourage conversation with friends and family.