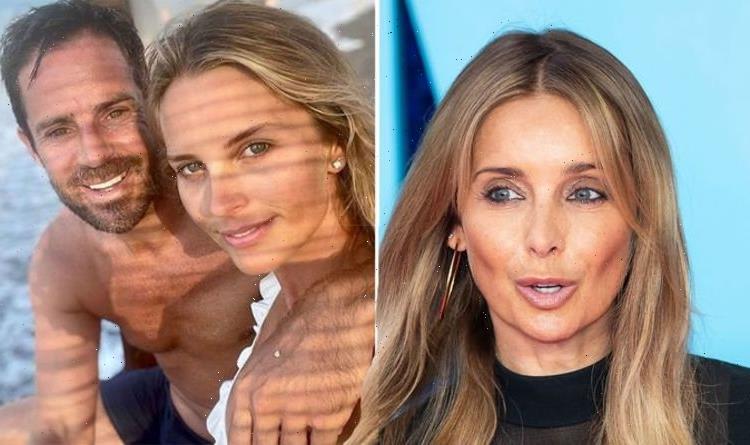 Louise Redknapp and Jamie Redknapp split after 19 years together back in 2017. The former couple share two sons together; Charley, 17, and Beau, 12. Last week, he tied the knot with his pregnant girlfriend Frida Andersson at a low-key ceremony in Chelsea, London.

According to a source, the 46-year-old was shocked by the news and has been finding it “tough”.

They said: “It’s very mixed emotions for her.

“In one respect she’s happy for him and she knows they have to move on, but part of her is finding it very tough because the family’s adjusting, there’s someone new and there’s going to be a new baby.”

The insider added to New! Magazine that she was “shocked” by their wedding and only found out about it recently through their sons.

“She didn’t have time to prepare because Jamie wanted to be married before the baby was born,” they continued.

Express.co.uk has contacted a representative for Louise for comment.

The singer’s ex and Swedish model Frida tied the knot at a registry office in Chelsea last week.

Their big day came as a surprise for many as no news of an engagement or wedding was known publicly.

Since the couple got together in 2019, they have kept a low profile and rarely share snaps of each other on social media.

Earlier this year, it was revealed Frida was expecting their first child together.

The pair are yet to discuss the news, however Harry Redknapp confirmed it was true back in May.

Louise and Jamie’s sons attended his big day alongside Harry and mum Sandra.

Last year, Jamie’s dad said his new daughter-in-law was “lovely” but didn’t want to speak about her, out of respect for Louise.

He told The Sun: “We did meet Frida and she is lovely, very nice, but I don’t want to talk about Jamie’s new relationship.

“The last thing I want to do is upset Lou. It is upsetting that Jamie and Lou aren’t together.”

He added their break-up was a “complete shock”.

The Eternal star has avoided speaking about her ex’s new relationship in public.

She has however discussed their split and how she regretted not trying harder in their marriage.

In an interview with You Magazine, Louise said she found her self-confidence again after competing on Strictly Come Dancing in 2016.

After her stint on the show, she decided her marriage was over.

The mother-of-two spilled: “Before anyone could stop me, I just ran, as fast as the wind would take me. I never once looked behind, until maybe too late.

“I should have paused for a minute and thought about other people and had just a bit more time to work out why I felt I couldn’t do it any more.”

She went on to urge those who had thought about ending their relationship to “slow down” before running.

“Stop, say what you need, say what you think, don’t be afraid to say what’s really going on. You don’t have to be quiet,” she added.